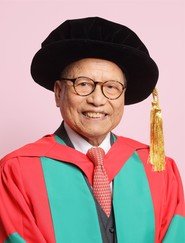 Dr David Sin Wai Kin is a pioneering business leader whose commercial interests and influence range from the jewellery sector to property development, rental property, hotel operations, and even banking and finance.

While his own education was halted at a very young age due to the Second World War, Dr Sin has been a strong advocate for higher education in Hong Kong and Mainland China.

In recognition of his contributions to Hong Kong and academia, the University has resolved to confer upon him the degree of Doctor of Social Sciences honoris causa.