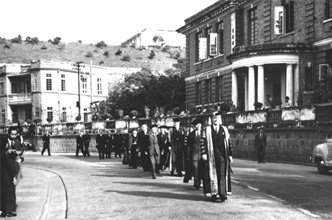 Part of the Procession of the 38th Congregation (1950) led by Sir Alexander Grantham, the then Chancellor, walking on Pokfulam Road.

The University's honorary degree is the highest accolade it can bestow on an individual, and is also one of its oldest and most cherished traditions.