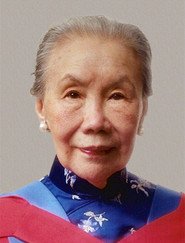 Such is still the way of the world that women are less often publicly honoured for their achievements than men. We are happy to honour two women this afternoon, and happier still that the two high achievers are mother and daughter ***certainly something unprecedented in the annals of this University. And what makes this even more gratifying is that both mother and daughter hold degrees from our University. Madam Fang Zhao Ling is Anson Chan's mother, so this is another first for our Chief Secretary. But while each illumines the other, neither depends on the other reflected glory.

Madam Fang Zhao Ling is one of China's foremost artists. She studied painting under the successive tutelage of three of China's most famous artists, Qian Songyan, Chao Shao An and Zhang Daqian. Now eighty-two years young a fact she proclaims with a flourish on her paintings and calligraphy she is still energetic, creative and prolific. Fang Zhao Ling early years coincided with a turbulent period of China's history. Her father was assassinated when she was eleven. Fortunately her mother was a woman of vision and foresight, an early believer in learning for women. Madam Fang and her sister were tutored by noted Wuxi scholars of the time in English, Chinese and Modern European History. Her talent in painting and calligraphy became evident at an early age, and she later enrolled at the Wuxi College of Chinese painting. Under the guidance of Chen Jiucun and Qian Songyan she learned to paint birds and flowers and landscapes. Her studies made her sufficiently proficient to undertake university studies at Manchester University, whither she went in 1937 to take a Bachelor of Arts Degree. She was a year short of obtaining her degree when the war intervened and she and her husband returned to a war-ravaged China. The misery of the war years left an indelible memory. Madam Fang was unable to do any creative work as the family drifted as refugees from place to place. These memories have caused Madam Fang to value peace and stability above all, and she gives expression to her fervent hopes for peace and prosperity, for joy and good fortune, in her paintings and her calligraphy.

The family went to Hong Kong after the war. But very shortly afterwards Madam Fang's husband, Fang Xingao, passed away. She was left to bring up eight very young children — six boys and a pair of twin girls. One of the twin girls is our present Chief Secretary.

The story of Madam Fang is in some ways a story of the indomitable spirit of Chinese women; it is a tribute not only to Fang Zhao Ling and her daughter Anson Chan but also to Madam Fang's mother, who gave her the opportunity for study and to her mother-in-law, a very open-minded woman who not only helped her look after her children but encouraged her to continue painting. Her husband Xingao had all along been supportive; even during the difficult war years he had made it possible for Fang Zhao Ling to study under Lu Xinnong and Chao Shao An at different times.

Madam Fang completed her BA studies, undertaken originally at Manchester University, at the University of Hong Kong, taking one year here to obtain her BA in Chinese in 1956, six years before her twin daughters obtained their degrees. Professor Francis Drake, then Head of the Department of Chinese, urged her to further her studies in Oxford. She then went to Japan, France, Switzerland, Germany and America. She held exhibitions in each place, to widen her circle of friends and exchange notes with fellow artists. Madam Fang feels still that it is necessary to have constant revitalization. She still travels to widen her perspective and to refresh her imagination, to be stimulated by new sights and fresh experiences.

She believes there are three essential attributes that characterize all successful artists: understanding, breadth and creativity. She believes that painting is hard work. First we have to go through an imitation stage, when we have to familiarize ourselves with the basics of brushwork by studying closely the works of our teachers and other masters. In the second stage we have to widen our exposure to famous works of art, Chinese and foreign. Subsequently it is necessary to travel extensively to visit famous mountains and rivers, explore the mysteries of nature which are sources of our inspiration. Fang Zhao Ling's style today is her own, a synthesis of all her years of practice and assimilation influences. She is not content to follow any single school of painting, but has evolved her own highly distinctive style, partly a product of her own forthright, resolute character and of her experiences in life. Two Western artists she admires are Matisse and Picasso. She was living in London when she went alone to see a Picasso exhibition in Paris and the paintings at the exhibition left a lasting impression on her. Equally unforgettable was his dictum that painters should all study Chinese art. Her work is rich in substance and colour and have a deceptive lack of sophistication. Her figures are elegantly simple; her landscapes are majestic. She is not restricted by any set rules of shading, line, composition or colour. Her work often flows from her emotions, resulting in a variety of effects. Her simple yet vigorous style is widely admired and has won national and international recognition. An artist who does not stand on ceremony, Madam Fang seems to set little store by awards and prizes, not caring to keep a list of these tangible tokens of her success.

Madam Fang paints solidly a good many hours a day, but she also pauses for human nature's daily food”. Between her sessions of creativity she naps and watches television. Watching the news being an indispensable part of her daily routine, Madam Fang is in touch with contemporary happenings. The Gulf War, the plight of the boat people are among the topics depicted in her paintings, but her greatest source of inspiration is her love of China. Even though The Boat People and Ode to World Peace are about Vietnamese refugees, when Fang Zhao Ling painted these her thoughts were of Chinese refugees during the War. She has travelled extensively and painted scenes recollected in tranquillity "of Lake Geneva, the coast of Greece, the border of Switzerland and France in Severe Winter, of herself Listening and Learning at Carmel, fusing East and West in works that are to use her own words "modern in touch and Chinese in feel". Stonehenge Revisited depicts that famous landmark in England but the thoughts behind it lie far away and long ago in Fang Zhao Ling's motherland. Indeed her love of China, its land, its people, and her hopes for them, and her fears, are constant themes. Among her favourite topics are the Loess Plateau in China, life in cave dwellings, scenes along the Yellow River and the Yangtze, pines on Huangshan and Lake Tai dragon boat races. A subject dear to her heart is the Peaceful Settlement of Hong Kong's Future. Such is her passion for creativity and innovation that she is constantly working on new themes and experimenting with new forms of expression.

After the turbulence of her early life Madam Fang is finding the autumn of her life a season of mellow fruitfulness. Not only does she find fulfilment in her work, which she tackles with undiminished indeed increasing zest and skill and confidence, but she also derives satisfaction from her children, grandchildren and great grandchildren. All eight of her offspring have achieved a high degree of success and they and their offspring are objects of Madam Fang's justifiable pride. She is reaping the harvest of her earlier toil.

John Ruskin has written, "fine art is that in which the hand, the head and the heart of man go together'. Fang Zhao Ling's work exemplifies this.

Mr. Chancellor, it is my pleasure to request you to confer on Madam Fang Zhao Ling, for her contribution to the arts the degree of Doctor of Letters honoris causa.