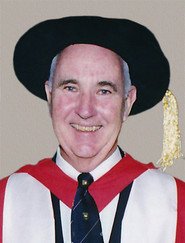 It is a privilege to be asked to respond on behalf of my colleagues and myself on this memorable occasion at which the University of Hong Kong has chosen to bestow on us Honorary Degrees.

Certainly for me who has had a long association with the University of Hong Kong, as no doubt do my colleagues also honoured today, it is a special occasion indeed.

I first visited Hong Kong in 1970 at which time I was at the University of Melbourne and an Expert in Immunology for the World Health Organisation, and I was here wearing that hat at the time. After I went to Oxford I have visited Hong Kong on many occasions, wearing different hats ranging from a role as a Final BM Examiner to Visiting Professor. It was always a pleasurable occasion and each time I never ceased to marvel at the changes that had occurred in the two or three years since I had last visited!

I have also had the pleasure of a long association with the Department of Surgery, which is an outstanding department with an international reputation of the highest order, first established by Professor G B Ong and so well carried on and indeed enhanced by Professor John Wong.

I well remember the first time I met the great G B Ong as a young surgeon in 1970. I was somewhat nervous as he had rather a fierce reputation for discipline amongst his younger surgical colleagues. However I survived the extensive ward round without doing anything too dreadful as I recollect and was rewarded with a delightful lunch with him and his staff. Later on I got to know John Wong very well and he became a good friend. Over the years there have been a number of visitors in my department from the University of Hong Kong and they have always been a pleasure to host.

So much then for my associations with Hong Kong. What then of my own interests? For just over thirty years I have had a major interest in organ transplantation biology and its relevance to clinical practice. In this time I have seen remarkable changes in organ transplantation which I doubt if any of us would have predicted back in the 1960s. For example at that time azathiaprine, developed as an anticancer drug, had just become available and for the first time we were seeing more than 50% of our patients with a kidney transplant surviving for at least a year, but with a heavy mortality from our inexperienced use of this immunosuppressive drug and in particular the concomitant use of steroids. However over the next decade we got much better at using these two drugs and although graft survival only improved modestly we certainly had most of our patients surviving, remembering that in the case of failure of the transplanted kidney, patients could go back on the artificial kidney. Again in the late 1960s we saw the first attempts at both liver and heart transplantation but successes were few and far between. One should remember that there was no artificial heart or liver so that there was nothing to offer a patient with end stage failure of a liver or heart except transplantation and indeed still today that remains essentially true. During the late 60s and the following decade we were learning a lot more about the biology of rejection of a transplanted organ and the role of matching donors and recipients for tissue antigens as well as the role of antibodies in rejection, both of which were major interests of mine.

Then in 1982 a new immunosuppressive drug, Cyclosporine became available and this led to a dramatic improvement in our ability to prevent rejection. As a result survival of kidney transplants at one year rose to 80 to 90%. Immediately we saw a marked improvement in the results of liver and heart transplantation to very similar levels, and also transplantation of the pancreas together with a kidney for diabetic patients with end stage kidney failure was achieved with increasing success. Now we have other new drugs available with different actions so that our immunosuppressive drug therapies have almost abolished the loss of organs from irreversible acute rejection. What a remarkable change over this last thirty years!

You might well think that the problems of organ transplantation are virtually resolved. But that is far from the truth and indeed to some extent we have become the victims of our own success. For as our patients survive longer and indeed for many years with their transplants, we have realised that there are complications of our immunosuppressive drugs that have become increasingly evident as time goes by. These include an increased incidence of coronary artery disease, increased susceptibility to infection, bone problems and an increased risk of certain types of cancer.

For this reason there is an enormous interest in the possibility of inducing tolerance to an organ transplant. Tolerance is a phenomenon whereby we would be able to prevent the rejection of an organ transplant but leave intact all the other defence mechanisms of the recipient. This again is a major interest of mine which I have been working on for my whole career in transplantation. We have achieved this in the laboratory in experimental models of heart and kidney transplantation so far and knew a lot about the mechanisms involved in the induction of tolerance to an organ graft. I am optimistic that we can achieve this in clinical practice in the not too distant future, at least in part, which might allow us to use minimal doses of drugs, and so avoid their long-term complications.

What of other problems? The major problem is the shortage of organ donors, as all over the world the gap between the number of patients requiring a transplant and the number of organs available increases. Thus the allocation of organs in an equitable manner is becoming an increasing moral and ethical issue.

Is there any solution to this ever-increasing shortage? The only obvious one is the possibility that it may become possible to transplant organs from animals such as the pig into man (known as xenotransplantation). However although there is tremendous interest and extensive research in this area there are many major problems to be resolved before this is likely to be successful, and indeed some experts wonder if it can ever be achieved. I think it can but is not just around the corner, and it is likely to be many years before successful xenotransplantation will enter the clinical arena.

Similarly in the future it may be possible to clone organs which would solve all our problems especially if it could be done from the patient's own tissues. However that is the science of the future but not impossible. Indeed the explosion in molecular biology in the last twenty years and its application to every area of research and medicine would suggest to me that in the future nothing is impossible. I would love to be around in 100 years to see what has been achieved. I suspect that our approach to transplantation and indeed all aspects of medicine will seem rather primitive to our successors at the end of the next century.

Can I conclude now Pro-Chancellor, Guests, and Ladies and Gentlemen by once again saying on behalf of my colleagues and myself how delighted we are to be honoured by the University of Hong Kong this afternoon.