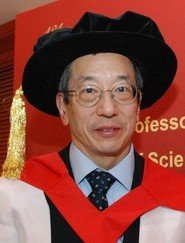 I am profoundly grateful to the University of Hong Kong for the kind words and for the honorary degree. I apologize I am not here in person this afternoon. This is because on the first leg of my journey to Hong Kong, the airplane developed mechanical trouble and had to turn back. The next flight was completely full. But thanks to the Internet, I can still send you this video.

I would like to tell you what I think makes our work successful, because I believe it gives some hints for human societies. We mix and match genes from all sorts of organisms throughout the kingdom of life and from all over the world. We started of course with a gene from glowing jellyfish, which live in the cold Pacific Ocean off the Northwest USA and Canada. But even with much effort and modification, this gene could only provide blue to yellowish green colors. To fill out the rest of the visible spectrum out to deep reds required finding and modifying genes from tropical fluorescent corals. We have long wanted to be able to make proteins that glow in the infrared, because such proteins would be more distinctive and would be visible much deeper inside the body than even their red predecessors. To reach the infrared, we had to switch from jellyfish and corals to modify a gene from a bacterium first discovered in spoiled meat. Other current projects in my laboratory exploit the talents of other bacteria that build magnetic compasses inside themselves, single-celled green algae and cress plants that can see light, and West African elephant-nose fish that send and receive electric pulses to navigate through muddy water. Sometimes we don't have to go to exotic organisms to find unusual and useful biochemical abilities: specialized cells in our own human immune system have an amazing ability to mutate genes millions of times faster than normal. Finally, where nature does not provide molecules with the right talents, we try to invent them from scratch.

The next step is to make a lot of small variations and different combinations of our building blocks. Ideally we generate millions or billions of candidates. Then we put them through rigorous unbiased testing under the most real-life conditions that we can devise. Once we identify the most successful combinations, we make more variations and repeat the whole process as many times as we can afford. Finally we try to use these molecular spies to image and influence important biochemistry inside living cells and organisms. If we succeed, many other people also use our reporters to study similar biology in other contexts. We do not always succeed in achieving our goals, but some of our molecular engineering projects have paid off well enough for the Nobel Chemistry committee to decide to include me in their 2008 awards.

So what does all this have to do with education and human society? I believe many of the same principles apply. Let's start with diversity. We in the lab seek and use genes embodying talents from all branches of life. Likewise I believe most multipurpose social organizations, including universities and businesses, benefit from engaging people of as wide a range of backgrounds as possible, including both genders and all ethnic backgrounds. My own laboratory has been fortunate to attract talented people from many parts of the world, including Hong Kong, mainland China, Japan, India, Israel, Ghana, Poland, Germany, Switzerland, Italy, France, Spain, Britain, and Canada. The tremendous prosperity and success of Hong Kong owes a great deal to its position as the place where Asian and Western ways most closely intermingle. From an even wider perspective, Yale professor Amy Chua has reviewed much of world history and presented strong evidence that empires ascend when they attract, assimilate, and reward talented people regardless of region of origin, religion, and social class. When the leadership becomes chauvinistic or xenophobic in an attempt to preserve its own privileges, the entire society soon loses its synergy, cohesion and prosperity. Professor Chua's 2008 book "Day of Empire" draws examples both from Western civilization and from Chinese history, including the T'ang and Mongol dynasties. In her penultimate chapter, she makes a telling observation: The U.S., for all its political paralysis, economic woes, and imperialistic blunders, still attracts many of the brightest young people from all over the world, who see the potential to better themselves and become full-fledged citizens if they desire. China is growing much faster and holds the lion's share of U.S. debt, but foreign visitors remain outsiders who cannot become accepted as Chinese, unless they are of Chinese descent. I would add that the country that deported Qian Xuesen in 1955 elected an Austrian immigrant as Governor of California in 2003 and the son of a Kenyan immigrant as President in 2008.

This brings me to my next point. I believe that optimal improvement of biomolecules, organisms, and societies requires unbiased selection for the best performance under real-world conditions or their closest possible simulation. These requirements translate to open markets, avoidance of conflicts of interest, and promotions based on merit rather than personal connections, family relationships, or political conformity. Intellectual creativity also requires freedom of expression and avoidance of censorship. When Albert Einstein left Germany in 1933, his explanation was that he would "only live in a land where there reigns political freedom, tolerance, and equality of all citizens before the law."

Chinese journalists often ask me what I think it will take for homegrown Chinese scientists to start winning substantial numbers of Nobel Prizes. Sometimes the comparison is made with Chinese athletes' enormous recent success at winning Olympic medals. One possible answer to the Nobel question is that it is just a matter of time. Olympic medals are awarded minutes after championship performances, whereas Nobel prizes are bestowed years to decades after the research was actually done. Nevertheless, over the last 108 years of Nobel prizes in the sciences, almost all of them recognized research done under relatively high standards of intellectual freedom. Of course, Nobel prizes are a very limited and imperfect sampling of scientific productivity, whose main advantages are that they were established a long time ago and come attached to names and faces. Still, I think more broadly-based indices such as impact factors or patents would show roughly the same trends.

Universities have a special role in fostering intellectual creativity and academic freedom, of course. They have the explicit mission of conducting ground-breaking research and allowing scholars to question established dogmas. But just as importantly, Universities provide a sheltering arena where students can try out different courses, areas of study, and career options, so that everyone can find out where his or her true interests and talents lie. I hope that each of you graduates took full advantage of this opportunity, which is perhaps the most valuable aspect of a university education, beyond the acquisition of book learning.

Obviously these are only my personal opinions, which I voice here to provoke debate (isn't that what a University is for?) and to fulfill my obligation to talk about things of more general interest than my own specialized area of expertise. You may well agree with Winston Churchill that "Scientists should be on tap, not on top." This particular scientist again thanks the University of Hong Kong for the honorary degree and the opportunity to pass on Oscar Wilde's words on advice: "The only thing to do with good advice is to pass it on. It is never of any use to oneself." Thank you again, and good luck in your future endeavors.