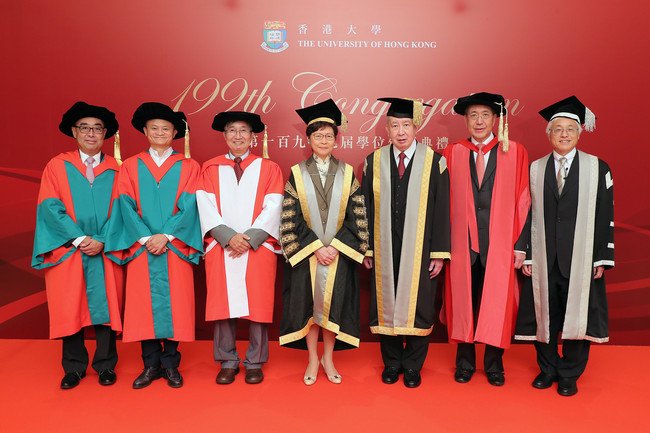 Dr Jack Ma, Doctor of Social Sciences honoris causa, delivered the acceptance speech on behalf of the honorary graduates. He thanked the University of Hong Kong for giving him this great trust of honour, which is a recognition of the entrepreneurship, of the “never give up” spirit.

He praised Hong Kong for its inclusiveness, innovation and its young people.

“I love Hong Kong because of Hong Kong’s inclusiveness, because of its open spirit, its open trade, open culture and open policy that made HK today.”

He urges young people to embrace innovation and look beyond Hong Kong to eye on the world, to become experts for the future.

He said new technology is going to change every aspect of the world and people have to change.

He believes young people should not focus only on IQ, EQ, but also LQ, the Quotient of Love, to care about others and their success.

Honorary Degrees of the University of Hong Kong are awarded to individuals in recognition of their distinguished service and commitment to the University, the community and academia. They are also conferred to those who have made valuable intellectual, social and cultural contributions to society and the world.