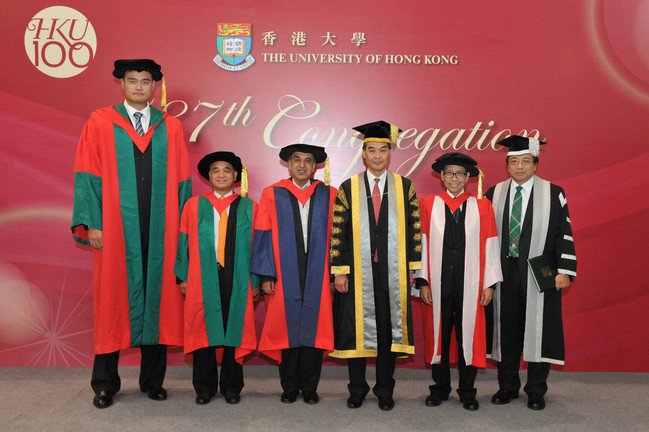 Mr Justice Bokhary delivered the acceptance speech on behalf of the Honorary Graduates. He talked about the law in his speech and told the audience that it has the capacity to bring great change for the better to the world, and that in the field of judicially enforced human rights, the law still has room to become better.

“What has driven – and will continue to drive – progress in this field? It is, I think, a constantly evolving and expanding belief that there are certain minimum entitlements which ordinary people can justifiably demand of government not only through the democratic process but through the judicial process as well – especially wherever and whenever there is a shortfall in democracy."

“The law will, I hope and trust, continue to protect those traditional human rights that consist of civil liberties, such as free speech – doing so in such new ways as new circumstances require. I also hope and trust that the law will develop ever more effective approaches and remedies directed to securing the practical application of more recently recognised human rights such as socio-economic rights. These have to do with, among many other things, adequate housing, which is a matter of acute concern all over the world, not least of all in Hong Kong.” He said.

At the ceremony, the Degrees on Class of 2012 of HKU’s ten Faculties were also conferred. The University has a total of 7,566 graduates this year at the doctoral, master and bachelor levels.

HKU Vice-Chancellor Professor Lap-Chee Tsui congratulated the graduates and wished them the best of luck in their life journey. From the day on, they will be a part of the great traditions of HKU, which will bring them respect and reputation as well as great responsibilities.

“As the graduates of a university with a strong commitment to freedom, liberty and diversity, and having in your possession the gifts of knowledge and learning, you must also learn to use them with wisdom and virtue, in a way that is right for the times.” Professor Tsui said the community is having high expectations on them of holding the highest moral standards and to be responsible individuals.

“Do not try to take short cuts; and do not compromise where your personal integrity or the human dignity of others is concerned.

There are global problems in our time. I implore you to approach life ready to stand up for the values that make up a free and civil society, and prepared to make a difference in all that you do,” he added.