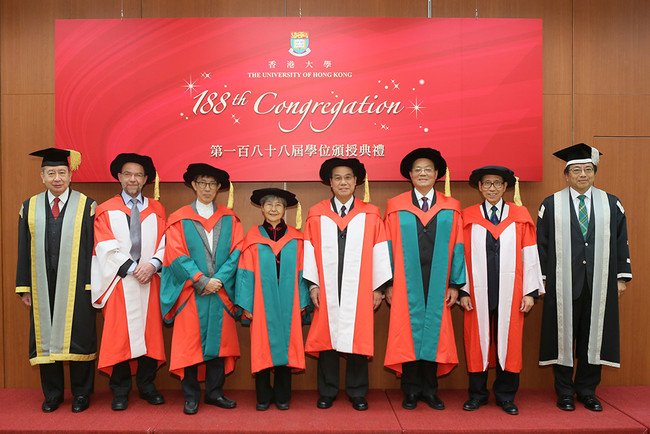 The Pro-Chancellor of the University of Hong Kong (HKU) Dr the Honourable David Li Kwok Po conferred honorary degrees upon six outstanding individuals at the University’s 188th Congregation on March 14.

Professor Sir Alec Jeffreys delivered the acceptance speech on behalf of the Honorary Graduates. A distinguished geneticist and internationally respected pioneer in DNA fingerprinting, Sir Alec said the honour was a recognition of the work of him and his team.

“I am delighted to accept this honorary degree not so much for myself but for all my colleagues who helped turn a crazy dream of DNA-based identification into a technology that has now spread to every corner of the world and directly touched the lives of tens of millions of people.” He said.

Sir Alec recalled that when he first started his DNA research in the early 1980s, it was entirely curiosity-driven and he was asking basic questions about the nature of DNA variation with the vague expectation that it might deliver something of practical use in medicine. The subsequent development of DNA fingerprinting has been amazing and its impact on the various aspects of life has been deep and widespread.

“Professor Mai Yiu Wing’s work on materials science is outstanding, and it may be of some interest that DNA has now entered even this field, particularly as a material for constructing elaborate nano-structures and nano-devices.

“Professor Fan Jinshi’s archaeological work is fascinating, and needless to say, DNA now plays an integral part in this field in terms of analysing ancient remains. Professor Wang Shenghong has made major contributions to electronics, including radio telescopes, which I hope will fulfill one of my great dreams, namely the eventual discovery of life beyond Earth.” He added.