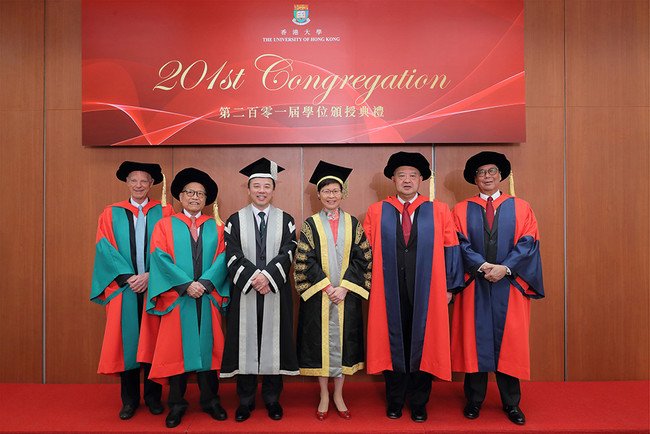 Chief Justice Geoffrey Ma praised Mr Justice Ribeiro, Professor Spence and Dr Sin for their significant contributions to society, while attributing his own award to the whole of the Hong Kong Judiciary.

Chief Justice Ma stressed the importance of an independent Judiciary in Hong Kong. The Basic Law provides that Hong Kong shall have independent judicial power. The Judicial Oath required to be taken by all judges provides that judges must “administer justice without fear or favour, self-interest or deceit.” With the growth of the community, the legal issues and cases that Hong Kong courts need to deal with are becoming more complicated, and judicial independence is ever more important than before.

“In the area of public law, where the public interest is engaged, cases often involve the Government and public authorities...These are cases which sometimes originate from political, economic or social controversies, on which members of the public may have strong views. These views are often diverse and at odds with one another, and at times seemingly impossible to reconcile.”

He said the difficulty for the courts can sometimes lie in how to resolve legitimate but conflicting considerations. He used Article 17 of the Bill of Rights on the freedom of peaceful assembly as an example and stated that the right, which is closely associated with the freedom of speech, is not without restrictions. The ordinance has constitutional backing under the Basic Law. The Court of Final Appeal also said that these rights are precious and lie at the foundation of society.

“Article 17 states that restrictions may be placed on the right of peaceful assembly if they are in conformity with the law and are necessary in the interest of national security of public safety, public order, the protection of public health or morals or the protection of the rights and freedom of others.”

Sometimes, the courts would need to undertake a balancing exercise to consider not only individual rights, but also the rights and interests of other members of the community and the community as a whole, he said, adding: “This is why the independence of the Judiciary is important in order to ensure that all cases that come before the courts, be they controversial or not, are decided strictly according to the law and legal principle, and nothing else.”

Chief Justice Ma reiterated that one should not only respect one’s own rights and freedoms but also the rights and freedoms of others, which forms the basis for a community to function. He emphasized the importance of a sense of community, which is part of the spirit of Law.

“After all, the guarantee of equality emphasized and repeated in the Basic Law and in the Bill of Rights, reflects the basic assumptions of tolerance, respect and compromise. These are the assumptions behind a sense of community.” He added.