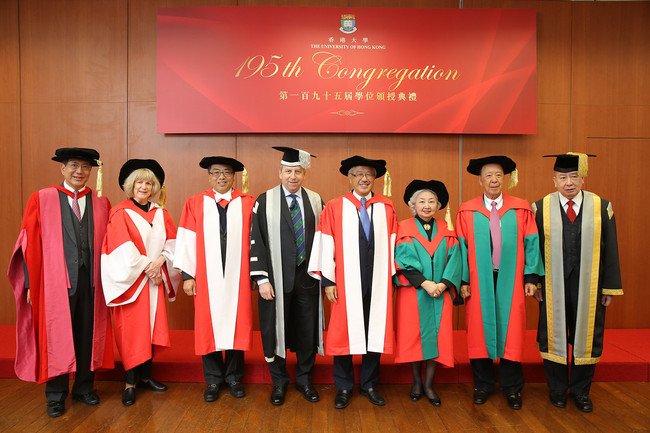 Professor Lap-Chee Tsui, the 14th Vice-Chancellor and President of the University, who was conferred Doctor of Science honoris causa, delivered the acceptance speech on behalf of the Honorary Graduates.

Professor Tsui is a world renowned scientist for the discovery of the gene for cystic fibrosis and contributions to the study of the human genome. He emphasised the importance of teamwork and spirit in his scientific achievements and in the operation of the University. He said the most important thing among the list of strategies when he was the Vice-Chancellor was “building a cohesive university family of staff, students, alumni and friends”.

Professor Tsui said: “When I was here at HKU, I had a group of absolutely brilliant and hardworking staff, both academic and non-academic, and a bunch of most loyal alumni and highly supportive friends. I am proud to say that we together have made quite a bit of advancements for the university over my 12 years of tenure as the Vice Chancellor and President here.”

He said under globalisation, there are greater demands for individuals with multiple skills and the abilities to innovate and lead. The role of universities, however, is not just to create and transmit knowledge and train competency in their students, but rather, to instill value to the next generation of leaders. He encouraged HKU family members to work together to continue to achieving excellence for the University.

“I am sure you will work with Professor Mathieson in the same spirit of partnership and commitment that you did with me, and I look forward to seeing this great University of Hong Kong continue to go from strength to strength in the years to come.” He said.