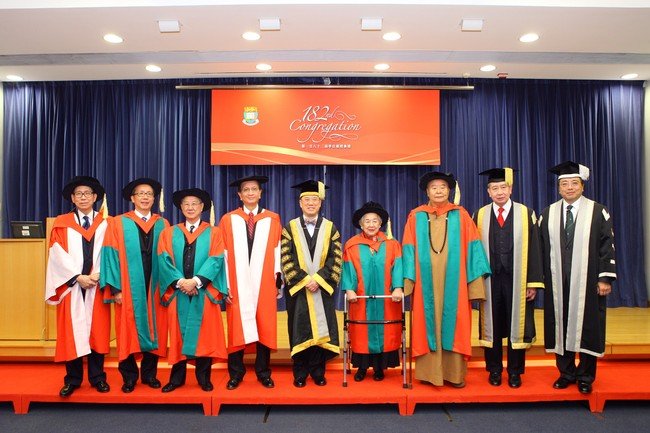 Professor Lawrence Chan Chin Bong is an alumnus of HKU, receiving his Bachelor of Medicine and Bachelor of Surgery degrees in 1966 and his Doctor of Science in 1993. He is currently Professor of Medicine, Molecular & Cellular Biology, and Biochemistry, as well as Betty Rutherford Chair for Diabetes Research at Baylor College of Medicine in Houston, Texas.

For his groundbreaking contributions to the areas of lipoprotein/lipid/carbohydrate metabolism and diabetes, and for his long dedication to research in the field of endocrinology, Professor Chan has received numerous North American awards. These include, inter alia, the Louis N. Katz Young Investigator Prize of the American Heart Association (1977), an Established Investigator award of the American Heart Association (1974-1979) and the MERIT award from the National Institutes of Health (1989-1999). He received the Michael E. DeBakey Excellence in Research Award twice, first in 2003 for basic science, and again in 2009 for translational research. He also received the Heinrich Wieland Prize from Germany (1988, an award conferred yearly to one scientist in the world for outstanding research in lipid-related fields).

Most significantly, Professor Chan was presented with the Edwin B. Astwood Award in 2007, regarded as one of the most prestigious awards in the field of endocrinology and metabolism.

Professor Chan is the Director of the National Institutes of Health (NIH) - Diabetes and Endocrinology Research Center (DERC) as well as the Chief of the Division of Diabetes, Endocrinology & Metabolism in the Department of Medicine. He has been an Associate Editor for a number of prestigious international journals, including Metabolism, Journal of Lipid Research, and Circulation, and has also served on the editorial board of other international biomedical journals.

Professor Chan has also remained loyal to his alma mater, returning repeatedly to deliver plenary lectures at conferences, and contributing to joint research projects and helping with the mentoring our postgraduate students.

In recognition of his contributions to medicine and academia, the University will confer upon him the degree of Doctor of Science honoris causa.

Under his leadership, the group diversified into a variety of specialisations: printed media, financial news agency, information and solutions, recruitment advertising and training, and lifestyle portals. Prior to founding HKET, Mr Fung and his partners saw the trade and development potential of the open door policy of Mainland China in the late 1970s and entered into a wide range of business ventures.

Mr Fung attended the University of Hong Kong and was the elected President of the Students' Union in 1971. He graduated from HKU with a Bachelor of Social Sciences degree in 1972, and continued his studies at the University of Manchester in the United Kingdom, receiving his Master of Arts degree in Economics in 1977.

In 2006, Mr Fung and his wife established the "Azalea (1972) Endowment Fund" with a donation to HKU of 10% of the issued share capital of Hong Kong Economic Times Holdings Limited, to provide funding for HKU designated projects that benefit the Hong Kong community.

Mr Fung was awarded the Gold Bauhinia Star in 2003. He was a founding member of the HKU Graduates Association Education Foundation. He is an Honorary Patron of the HKU Foundation and has enthusiastically guided the University's students as an HKU Mentor.

In recognition of his contributions to academia and Hong Kong, the University will confer upon him the degree of Doctor of Social Sciences honoris causa.

The Venerable Master Hsing Yun is a world-renowned religious leader, author, educator, humanitarian and philanthropist. He is the founder of the Fo Guang Shan Buddhist order and the affiliated Buddha's Light International Association, one of the largest international Buddhist organisations in the world.

Born in 1927 in rural Jiangdu, Jiangsu Province, China, Master Hsing Yun began monastic life when he was just a young boy. He has become known for his "Humanistic Buddhism" philosophy, which focuses on the issues of the world rather than on how to leave the world behind. Master Hsing Yun is credited by Buddhist scholars as one of the forefront leaders in the modern reformation of Buddhism, by opening monasteries, universities and schools around the world, as well as engaging in religious dialogue amongst other Buddhist sects and religious orders.

HKU has also benefitted from Master Hsing Yun's philosophy of outreach, attending the opening ceremony of the Center of Buddhist Studies Library in 2003, and returning regularly in the following years to share his wisdom with us in his lectures and public talks.

Master Hsing Yun has organised massive relief activities for major natural disasters, including the 1991 flood in East China, the 1999 Taiwan earthquake, the 2004 tsunami in South Asia, and the 2008 Sichuan earthquake. He has also set up hundreds of schools, hospitals, clinics, orphanages and charity projects in poverty-stricken communities around the world.

In recognition of his contributions to humanitarian and philanthropic causes around the world, the University will confer upon him the degree of Doctor of Social Sciences honoris causa.

Dr Serena Yang Hsueh Chi grew up in Japan in a multicultural and multilingual environment. She received a Bachelor of Arts degree from the Kwansei Gakuin University in Japan in 1955, and at the age of sixty-two, joined HKU in 1994 as a visiting student.

Dr Yang developed a passionate interest in the history of psychoanalysis in Japan, and has translated many articles, written several papers and a monograph on the subject, and presented her work internationally. She helped establish the ‘Yang Hsueh Chi Staff Research Fund' in 1996 and the ‘Yang Hsueh Chi Education Fund' in 2003 for research in the Department of Psychology.

Many HKU disciplines, endeavours and projects have benefitted from Dr Yang's support - from the Social Sciences to Medicine. These include student scholarships, the Oxford-HKU Psychology student exchange program, distinguished lectures, and Endowed Professorships. The Serena Yang Library and Prizes were established in honour of her contributions to the Department of Surgery. She shares the University's focus on internationalisation, and helped set up its first international student centre on campus, the Global Lounge, in 2005, and has supported the Faculty of Social Sciences' "Social Exposure Program".

Currently, Dr Yang is an Honorary Senior Research Associate of the Department of Psychology. She was one of the founding members of the HKU Foundation and remains one of its Honorary Patrons.

In recognition of her contributions to academia and Hong Kong, the University will confer upon her the degree of Doctor of Social Sciences honoris causa.

Professor Richard Yu Yue Hong graduated from HKU with the Bachelor of Medicine and Bachelor of Surgery degrees in 1958, after which he completed his clinical training at Queen Mary Hospital and his research at the University College Hospital, London, where he was awarded a PhD in 1966. Returning to HKU, he then held the posts of Lecturer and Senior Lecturer in the Department of Medicine, and completed his Doctor of Medicine degree in 1972. Professor Yu went into private practice in 1973, but continued to teach in the Department as Honorary Clinical Lecturer and later as Honorary Clinical Associate Professor.

Professor Yu is a Fellow of the College of Physicians in Hong Kong, the three Royal Colleges of Physicians in UK and Australia, and of the Academies of Medicine of Hong Kong and Singapore. He was the Founding Honorary Secretary of the Hong Kong College of Physicians (1986-1995), its Vice-President for Education (1993-1995), and then its President (1998-2004). He has served as a member of the Hospital Governing Committee of the Ruttonjee and Tang Shiu Kin Hospital (1992-2002), and the Queen Mary Hospital and Tsan Yuk Hospital since 2003.

Just as the Hong Kong College of Physicians continues to benefit from Professor Yu's wise counsel, so indeed does Hong Kong society as a whole, as he persists in his lifelong quest to raise the quality of medical education, hospital services and the medical sector overall. At present, he is the Chairman of the Higher Physician Training Committee, leading a revision exercise to implement changes in the Annual and Exit Examination for Higher Physician Trainees to ensure fairness, transparency and accountability.

In recognition of his contributions to medicine and the community, the University will confer upon him the degree of Doctor of Social Sciences honoris causa.