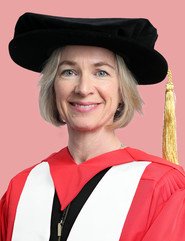 Professor Jennifer A Doudna is a Professor of Molecular and Cell Biology and Chemistry at the University of California, Berkeley, where she holds the Li Ka Shing Chancellor's Chair in Biomedical and Health Sciences, and is an Investigator at the Howard Hughes Medical Institute. She holds a Bachelor of Arts degree in Chemistry from Pomona College and a PhD from Harvard University.

Professor Doudna has been a leading figure in what is often referred to as the 'CRISPR Revolution' and she is renowned for pioneering a simple way of editing the DNA of any organism using an RNA-guided protein found in bacteria.

Her research sought to understand how RNA molecules controlled the expression of genetic information, which led to insights about CRISPR-Cas9-mediated bacterial immunity. In 2012, Professor Doudna and her colleagues made a discovery that relied on a protein named Cas9 found in the Streptococcus bacteria CRISPR immune system that worked like scissors. The protein attacks its prey, the DNA of viruses, and slices it up. This technology - precision 'DNA scissors' called CRISPR-Cas9 - could be used for efficient genome editing in animals and plants, and has exploded in popularity since it was first published and is revolutionising genetics, molecular biology and medicine.

Worldwide, researchers are using Cas9 to investigate the genetic roots of problems as diverse as sickle cell anemia, diabetes, cystic fibrosis, AIDS and depression, in the hopes of finding new drug targets. Others are adapting the technology to re-engineer yeast to produce biofuels and wheat that can withstand pests and drought.

In recognition of her contributions to medicine, society and the world, the University has resolved to confer upon her the degree of Doctor of Science honoris causa.