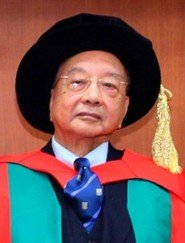 Dr Mok Hing Yiu was born in 1923 and is the great-grandson of the first comprador of the British firm Butterfield & Swire (Taikoo). Dr Mok joined the Medical Faculty of HKU in 1939 as a King Edward VII Scholar, but his studies were interrupted by the outbreak of war. He received a wartime MBBS degree from HKU in 1947 and was awarded the Hong Kong Defence Medal and the Auxiliary Medical Service Medal for his wartime service.

After further medical studies and clinical work in the UK, Dr Mok returned to Hong Kong and served in the Government's Medical and Health Department as Acting Medical Specialist. He started his own practice in 1953 and retired in 1993.

In recognition of his contributions to the medical sector in Hong Kong and to academia, the University has resolved to confer upon him the degree of Doctor of Social Sciences honoris causa.