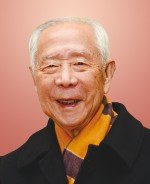 Dr the Honourable Henry Hu Hung Lick is the Founder and President of the Hong Kong Shue Yan University and pioneered the development of private higher education in Hong Kong.

Born in 1920 in Shaoxing, Zhejiang Province, Dr Hu graduated from the National University of Political Science in 1942 where he studied diplomacy. He received a doctoral degree in Law from the University of Paris in 1952, and qualified as a barrister in the UK in 1954. Dr Hu began his legal practice upon his return to Hong Kong, specialising in international law. He endeavoured to improve livelihoods in the territory and advocated for the acceptance of Chinese as an official legal language.

Together with his late wife Dr Chung Chi Yung, Dr Hu established the Shue Yan College in 1971, which was recognised by the Government as a private institution of higher education in 1976. The couple then worked tirelessly to enhance the teaching and learning of the college, both raising funds and using their personal savings to realise their vision of building a new and better campus. The college continued to prosper and was accredited by the Government in 2006 as Hong Kong’s first private university.

He was awarded an OBE and appointed Justice of the Peace in 1976, and awarded the Gold Bauhinia Star in 1998 and the Grand Bauhinia Medal in 2008. Dr Hu is an Honorary Fellow of the University of Glamorgan and the Chinese Academy of Social Sciences.

In recognition of his contributions to higher education and society, the University has resolved to confer upon him the degree of Doctor of Social Sciences honoris causa.