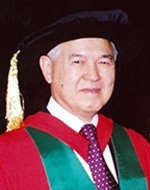 Mr Edmund Tse Sze Wing is the Chairman and Chief Executive Officer of American International Assurance Co., Ltd (AIA), a company with headquarters in Hong Kong. AIA is the largest life insurance company in Southeast Asia and is a member company of American International Group, Inc (AIG). He is also the Senior Vice-Chairman of AIG, in charge of AIG's worldwide life insurance operations in more than 130 countries and jurisdictions. A graduate of HKU, Mr Tse received his BA in mathematics in 1960. He obtained diplomas from the College of Insurance and the Graduate School of Business of Stanford University. In 1997, in recognition of his contributions to the insurance industry and to Taiwan, he was honoured with the Distinguished Businessman of the Year award. The following year he was made an Honorary Fellow of the University of Hong Kong. In 2001 he was awarded the Gold Bauhinia Star by the government of the Hong Kong SAR. Mr Tse has helped establish an Institute of Mathematics at HKU and sits on the Honorary panel for BSc (Actuarial Science) Programme of the Department of Statistics and Actuarial Science.

In recognition of his contributions, the University has resolved to confer upon him the degree of Doctor of Social Sciences honoris causa.