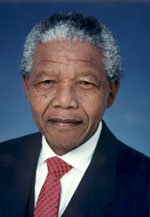 Dr Nelson Rolihlahla Mandela was South Africa's first black president. He gained almost legendary status in the 1980s as South Africa's leading anti-apartheid figure, assuming the forefront of the black struggle after his release from prison.

In 1944 together with Oliver Tambo and Walter Sisulu, he formed the African National Congress Youth League which came to dominate the ANC in 1948. He became president of the League in 1950. Helped by Walter Sisulu, Nelson Mandela and Oliver Tambo also set up South Africa's first black law firm. Throughout the 1950s he was the victim of various forms of repression. He was banned, arrested and imprisoned. In 1962 he was sentenced to five years in prison for inciting people to strike and with leaving South Africa without a passport. While serving his sentence he was found guilty of sabotage and treason following which he was sentenced to life imprisonment.

Dr Mandela spent the next 27 years in prison. He was released in June 1990. The following year he became president of the ANC and in 1993 he received the Nobel Peace Prize. In 1994 he was chosen as President of South Africa. Dr Mandela retired from public life in 1999.

In recognition of his contributions, the University has resolved to confer upon him the degree of Doctor of Laws honoris causa.