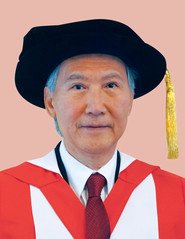 Professor Hu Chenming is an electronics engineer, TSMC Distinguished Professor Emeritus at the University of California (UC), Berkeley, and regarded internationally as the Father of the 3D Transistor.

Professor Hu’s pioneering achievements in the development of Fin Field-effect Transistor (FinFET) technology in 1999 were regarded as the most radical shift in semiconductor technology in over fifty years. By 2015 all top servers, computers, Android and iOS phones were using FinFET processors.

He has served as Founding Chairman of Celestry Design Technologies, Chief Technology Officer of TSMC (Taiwan Semiconductor Manufacturing Company) and Chairman of the non-profit Friends of Children with Special Needs.

Professor Hu was honoured with the IEEE Jun-ichi Nishizawa Medal in 2009, the Asian American Engineer of the Year Award in 2011, the IEEE's highest honour - Medal of Honour - in 2020 and holds memberships in the US National Academy of Engineering, the Chinese Academy of Sciences, the US Academy of Inventors and Academia Sinica. He received the National Taiwan University Distinguished Alumni Award in 2011 and was conferred an Honorary Doctoral Degree from the National Chiao-Tung University of Taiwan in 2012.

In 2016, Professor Hu was presented with the National Medal of Technology and Innovation from President Obama in the White House.