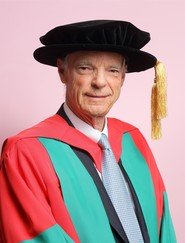 Professor Andrew Michael Spence was awarded the 2001 Nobel Prize in Economics for his contributions to the analysis of markets with asymmetric information. His ground-breaking theory of market signalling arose from his doctoral research at Harvard University (1968-72), published as 'Job Market Signaling' in the Quarterly Journal of Economics in 1973, and as a book titled Market Signaling: Informational Transfer in Hiring and Related Screening Processes, which was published by Harvard University Press in 1974. His job-market signalling model has inspired an enormous volume of literature in the field of contract theory, and his analysis of markets with asymmetric information has led to numerous applications in the field of microeconomics. Markets with asymmetric information happen when people on one side of a transaction have better information than those on the other side. For example, employees can improve their remuneration by acquiring a higher level of education which is costly to them, thus signalling to their employers (who are not as well-informed) that they are deserving of higher wages simply because they have paid for a costly higher level of education. Information is transfer in equilibrium if the cost of the signal, in this case education, (measured in cost, time, and ability to be admitted), is negatively correlated with the unseen attribute (from the employer's point of view) with the costs of the signal. To put it differently, the value of a University of Hong Kong degree for those fortunate enough to gain admission, has two parts: the value of the knowledge acquired and the signal of above average talent. But it is somewhat dispiriting for teachers at a university to learn that, in this example, it is not necessary for the education gained to have any intrinsic value; what is necessary is that the education is differentially costly and that this signal is conveyed effectively from employee to employer. It is now universally recognised that such asymmetrical information plays a critical role in the way that modern markets operate.

Michael Spence was born 'accidentally' in New Jersey in 1943 during a visit by his mother to friends in America, but spent all of his boyhood years growing up in Canada. His father's family came from an academic background, and it was from his father that our honorand learned the value of precision in thought, the power of abstraction, and the use of symbols to capture structures and relationships, while he credits his mother with passing on to him the tenacity that has served him so well throughout his academic career. Professor Spence describes his early education as 'excellent' and 'liberating'; he clearly made the most of everything that the University of Toronto High School had to offer, graduating as school captain in 1962 and proceeding to Princeton University for his undergraduate education, where he majored in philosophy and graduated summa cum laude in 1966. He was then awarded the Rhodes Scholarship to Oxford, where he read mathematics at Magdalen College. Returning to the United States in 1968 for his doctoral studies in economics at Harvard University, Professor Spence spent four years researching the informational structure of markets, a period that he describes as 'an exciting time' during which he learned mathematical economics and general equilibrium theory while trying to understand the complexities of how markets work. His was not a 'safe' or 'manageable' doctoral topic like those that we often recommend to our postgraduate students, but rather one that was risky and extremely difficult. In his case, however, the risks paid off: Professor Spence's thesis won the David A. Wells Prize, while the underlying research produced a new economic model the importance of which was ultimately recognised with his Nobel Prize in 2001. The impact of Professor Spence's early scholarly work has therefore been profound, providing an inspiration to all young scholars who aspire to greatness but who sometimes doubt the intrinsic strengths of their doctoral work.

Professor Spence's distinguished academic career began with a teaching post at Harvard's Kennedy School of Government in 1971, before he moved to the Economics Department at Stanford University between 1973 and 1975, where he pursued research in applied microeconomic theory and industrial organisation. Returning to Harvard as professor in economics in 1975, he began teaching economic theory to graduates and industrial organisation to undergraduates, for which he was awarded in 1979 the John Kenneth Galbraith Prize for excellence in teaching. In 1982 he received the John Bates Clark Medal from the American Economic Association for his 'significant contribution to economic thought and knowledge', and in 1983 he was elected as a Fellow of the American Academy of Arts and Sciences. In 1983 he also became chairman of the Department of Economics at Harvard University and was appointed as the George Gund Professor of Economics and Business Administration. He attributes the excellent academic environment that he experienced in his early teaching career to a healthy synergy between teaching and research, in which teachers and students inspire each other. Professor Spence rejects the idea that research is a 'solo and at times lonely' activity; he rather considers it to be 'a communal activity ... where interaction and interchange generate ideas'. He acknowledges that his own prize-winning work was built upon the applied microeconomic foundations of several fields in which his colleagues and students played an important role, but he also pays tribute to the intellectual grounding that he received from his thesis advisors Kenneth Arrow, Tom Schelling and Richard Zeckhauser as he grappled with the informational structure of markets.

After a distinguished career as a teacher and scholar between 1971 and 1984, Professor Spence embarked upon a 'second career' as an academic administrator, first as Dean of the Faculty of Arts and Sciences at Harvard University (1984-90), and later as Philp H. Knight Professor and Dean of the Graduate School of Business at Stanford University (1990-99). At Harvard, his administrative responsibilities included overseeing the finances, organisation and educational policies of the Faculty of Arts and Sciences, but he also had responsibility for Harvard College, the Graduate School of Arts and Sciences, and the Division of Continuing Education. Professor Spence is currently a senior fellow at the Hoover Institution at Stanford University, where he is also Philip H. Knight Professor Emeritus in the Graduate School of Business. In 2010, he joined New York University's Stern School of Business as a professor of economics, and in 2011 he became a visiting professor at the SDA Bocconi School of Management in Milan, Italy. At the age of seventy-five, he is still active as a teacher and researcher, evidence that academics continue to exceed expectations well beyond the normal retirement age.

Professor Spence has occupied numerous other leadership positions outside of Academe. He was a member of the Economics Advisory Panel of the National Science Foundation between 1977 and 1979, and in 1979 served as a member of the Sloan Foundation Economics Advisory Committee. From 1991 to 1997 he was chairman of the National Research Council Board on Science, Technology and Economic Policy. Between 2006 and 2010, he was Chairman of the Independent Commission on Growth and Development, a global policy group searching for strategies to produce rapid and sustainable economic growth while at the same time reducing worldwide poverty in developing countries. He has also served at various times as a member of the boards of directors of several major private companies, and has been a consultant in the world of business. At the University of Hong Kong, he is currently co-chair of the Advisory Board of the Asia Global Institute.

Madam Chancellor, in recognition of his contributions to the field of economics, and especially his analysis of markets with asymmetric information, it is my honour and privilege to present to you Professor Andrew Michael Spence for the degree of Doctor of Social Sciences honoris causa.