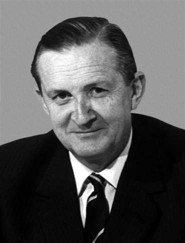 The Rt Hon the Lord Crawford Murray MACLEHOSE of Beoch

To combat corruption, good laws and good organisation are essential, but I put my trust principally in the services of sound men. We have therefore decided, on the advice of the Executive Council, to set up a separate Anti-Corruption Commission under a civilian Commissioner. Lord Crawford Murray Maclehose of Beoch will be remembered for a long time for creating the Independent Commission Against Corruption (ICAC) in 1973 at a critical time when Hong Kong's integrity was challenged. His ability to be incisive in making decisions, his openness in seeking counsel and his sensitivity to the needs of the ordinary people are the trade marks of Murray Maclehose, the longest serving governor of Hong Kong. Born in 1917 and educated at Rugby and Balliol College, Oxford, Murray Maclehose joined the diplomatic service in 1947. After distinguished postings in Asia and Europe, he was appointed Governor of Hong Kong in 1971.

The birth of one of Asia's four dragons owes a great deal to Murray Maclehose, for he had the foresight to introduce improved social services for the common people as the territory strove to claim its rightful place as a newly industrialised "country" in Asia. The ten year strategy in housing might have set for itself too high a goal, but it did result in improved living conditions for the ordinary people. Hong Kong is a living example of how a capitalist society can reinvest in its people. Through carefully nurtured planning, both health care and education became affordable and reasonably efficient, providing vital support for a workforce which adapted well to a changing economy. Similarly, the building of new towns like Tuen Mun, Shatin and Taipo constituted the infrastructure on which industrialised Hong Kong functioned well.

Mr Chancellor, we welcome back today a compassionate Hong Kong belonger who has championedthe cause of the territory so well. For a job well done, the University wishes to acknowledge his achievement. I therefore present to you, the Right Honourable LordCrawford Murray Maclehose of Beoch, for the award of the Degree of Doctor of Laws honoris causa.