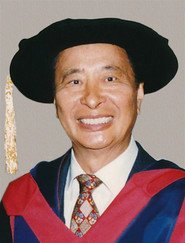 Success stories have a universal appeal and when the success reaches a phenomenal level the story becomes the stuff of legend. Such a legendary figure is Dr Lee Shau Kee, who "doth bestride" Hong Kong's business world "like a Colossus". To the Hong Kong public he needs no introduction; he has been engaged in property development for more than forty years here and is the founder and Chairman and Managing Director of Henderson Land Development Company Ltd. To the general public "Henderson Land" is a guarantee of quality and value for money. It has become one of the "brand names" of local housing, as it were.

In addition Dr Lee is the Chairman and Managing Director of Henderson Investment, the Chairman of Henderson China Holdings and the Hong Kong and China Gas Company, the Vice Chairman of Sun Hung Kai Properties, as well as a Director of Hong Kong Ferry, the Bank of East Asia, and Miramar Hotel and Investment Company. This is only a partial listing of Dr Lee's many titles; to merely recite a list of his many offices would be exhausting.

Tribute has been paid, songs have been sung about Dr Lee Shau Kee as a phenomenally successful businessman. He came from Shunde county in 1948 as a nineteen year old with only one thousand dollars and through acumen and entrepreneurial skills, rose to become one of Hong Kong's leading billionaires. In 1996 and again in 1997 Forbes placed Dr Lee fourth in its list of the world's wealthiest men and first in the list of Asia's wealthiest. This is already part of the legend. There is little need to elaborate, only to say that it is Dr Lee's firm belief that business success is built on integrity and honesty, knowledge of and familiarity with the market, caution and wisdom in decision-making. There is no such thing as a magical Midas touch. One of Lee Shau Kee's contributions to Hong Kong is that he has placed it firmly in the international arena as the home of world-class entrepreneurs.

Today it is on Dr Lee's other contributions to the community that I wish to focus. In feudal China businessmen were not rated as highly as scholars. In the case of Dr Lee he manages to maintain a lively interest in scholarly matters; in the cut-throat world of business Lee Shau Kee has gained a reputation for being a true "gentleman" among those who come into contact with him. He is noted for being low-key, loyal, unpretentious and generous. He has paid meticulous attention to the quality of the flats his company builds, giving buyers "full measure". As a property developer, he has contributed towards enhancing "the quality of life" of Hong Kong's citizens. His reputation has been enhanced by his philanthropic activities over the years. Again only a partial listing of what he has done as a philanthropist will be attempted.

He has given generously to a number of charitable projects, extending beyond Hong Kong to the Chinese Mainland, Macau, Britain and North America. His contributions to the education and training of the young are particularly significant. Like the astute businessman that he is, Dr Lee sees education as the best possible investment. He is particularly interested in setting up primary and secondary schools in areas on the Mainland where educational resources are insufficient. At the same time he is keen to see the training of professionals in newly developed regions. In this way the educational standards of his compatriots will be raised and this kind of investment can be seen as a way of contributing to the modernisation of the Motherland.

Educated young people are a community's most valuable assets. This is particularly true of the Chinese Mainland, where a small investment can produce a phenomenally high yield. His donations show his awareness of the need for a well-rounded education, not just "book learning". For example, he is the founder of the Hong Kong Federation of Youth Groups Lee Shau Kee Youth Exchange Fund; he made a donation of $10 million to promote youth exchange programmes for young people to develop an international perspective. Through various kinds of youth exchange activities, the Federation hopes to broaden their vision and stimulate their concern for community and global affairs. He is also a keen supporter of the World Fellowship of the Duke of Edinburgh's Award, which aims to help young people spend their time wisely and develop their talents to the full; Dr Lee made a $2 million donation in 1991.

As early as 1979 Dr Lee established the "Lee Shau Kee Scholarship" tenable at Wadham College, Oxford. Each year three or four Hong Kong students are selected for direct admission to Wadham College, Oxford for undergraduate degree courses and the Scholarship provides financial support to those selected students in need of such assistance. Dr Lee has a personal interest in these students, and tries to maintain links among the returnees. Through the years, he has also extended his help in the form of both money and expertise to our sister institution, The Chinese University of Hong Kong.

Nor has Lee Shau Kee been slow in extending a helping hand to the Chinese Mainland: in 1982 he and his friends set up the Pei Hua Education Foundation Co Ltd, the aim of which was to contribute to China's modernization by helping to train and develop her professionals. To this Foundation Dr Lee has donated a total of $22 million.

Indeed Dr Lee's love of China, his loyalty to his place of origin are evident in his activities throughout his career. He has come a long way from his relatively modest beginnings in Shunde, but he keeps up fraternal ties with his home county: he is Honorary President of the Shun Tak Fraternal Association, which is active in participating in community and educational activities. He has made donations to the Shun Tak Hua Qiao College (now renamed the Shun Tak Lee Shau Kee College), Shun Tak Hospital and Shun Tak Stadium amounting to more than $90 million.

Dr Lee is no stranger to public recognition for his achievements: In 1987 was awarded an Honorary Fellowship of Wadham College, Oxford, a most prestigious award. Dr Lee is the only Hong Kong person - indeed the only Chinese - person to have been so honoured. He was awarded an Honorary Doctorate in Business Administration by the University of East Asia, Macau in 1988, and an Honorary Doctorate in Social Science by the Chinese University of Hong Kong in 1993. In 1997 he was again made Honorary Doctor of Business Administration by the Hong Kong Polytechnic University. Our University hastens to join this choir of praise: we salute Dr Lee Shau Kee, a man who dared to "dream the impossible dream" and through hard work and determination, integrity and acumen, saw that dream become a reality.

Mr Pro-Chancellor, in recognition of his services to the economy of Hong Kong and to education, I commend Dr Lee Shau Kee to you for the conferment of the degree of Doctor of Laws honoris causa.