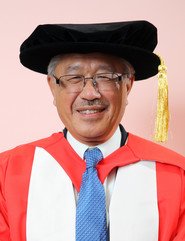 Dr Victor Dzau is a pre-eminent physician and scientist who has made a significant impact on medicine through his seminal research in cardiovascular medicine and genetics, his pioneering of the discipline of vascular medicine and his leadership in health care innovation and global health.

Victor was born in Shanghai in 1945 but, when he was only five, his family fled China to begin a new life in Hong Kong. He attended St Joseph's College and, at the age of eighteen, left home for higher education in Canada.

He graduated with his medical degree from McGill University in 1972 and then received training in Harvard hospitals in Massachusetts. He carried out his post-doctoral research at Harvard University.

Perhaps his most outstanding research has been in the areas of cardiovascular medicine and genetics. His important work on the rennin angiotensin system (RAS) paved the way for our contemporary understanding of RAS in cardiovascular disease and the development of RAS inhibitors which are widely used as lifesaving drugs. He also pioneered gene therapy for cardiovascular disease and his work on stem cell paracrine mechanisms and the use of microRNA in direct reprogramming has provided novel insight into stem cell biology and regenerative medicine. Indeed his work has transformed the field of cardiac regeneration and his innovative research has and will continue to benefit many suffering from heart and blood vessel diseases, ranging from hypertension to heart failure. His achievements truly embody the concept of translational medicine from ‘bench to bedside'.

He is not only a dynamic researcher but also a global leader in health care policy. Influenced by his childhood experience in post-war China, one of Victor's passions is in addressing global heath inequality. His vision is for academic health sciences centres to lead the transformation of medicine through innovation, translation and globalisation. In pursuit of achieving this vision he and his colleagues developed the Duke Translational Medicine Institute, the Duke Global Health Institute (which involved interdisciplinary collaboration among medicine, engineering, law, economics, business and environmental sciences), the Duke-National University of Singapore Graduate Medical School and the Duke Institute for Health Innovation. Their purpose is to create a seamless continuum from discovery and translational sciences to clinical care. Indeed, his work has been inspirational in leading Duke to being a major force in global medicine and health.

As a pre-eminent global health leader Victor has advised many Governments, companies and universities worldwide. He served on the Board of Health Governors of the World Economic Forum and chaired its Global Agenda Council on Personalized and Precision Medicine.

By way of recognition of his outstanding work he has been awarded several honorary doctorates. He has also been the recipient of the Gustav Nylin Medal from the Swedish Royal College of Medicine, the Max Delbruck Medal in Germany, the Hatter Award from South Africa, the Ellis Island Medal of Honour from the USA, the Polzer Prize from the European Academy of Sciences and Arts, the Distinguished Scientist Award from the American Heart Association and the Henry Friesen International Prize (an honour he shares with another of our honorary graduands, Professor Lap-Chee Tsui).

In 2015 Victor received the Project HOPE Global health Partner Award in recognition of his stellar contribution as a lifelong champion of global health care services. In summarising the achievements of this remarkable man I cannot improve upon the press release which preceded this award:

"Through his seminal research in cardiovascular medicine and genetics, Dr Dzau has dedicated his life to addressing health and social inequities locally and globally".

Happily, Victor maintains both professional and family links with Hong Kong and I believe that his cousin James, a graduate of HKU, is here tonight. Professionally, his most recent collaboration has been with Dr Gabriel Leung, our Dean of Medicine, on the National Academy of Medicine Commission on Global Health Risk Framework for the Future, whose report makes important recommendations to world leaders and key stakeholders on global pandemic emergency response and preparedness.

On a personal note Victor tells me that he considers himself to have been very fortunate and privileged in both his personal and professional lives and his aim is to give back to society and make a difference. He believes that it is his duty to bring his understanding of health, social inequality, clinical practice and science to the policy arena to address the challenges facing society.

Mr Pro-Chancellor, I rather think that it is we who are fortunate and privileged to be his beneficiaries.

Mr Pro-Chancellor, it is my honour and privilege to present to you Dr Victor Joseph Dzau for the award of Doctor of Science honoris causa.