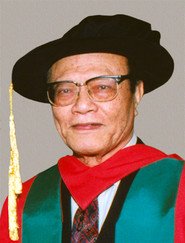 Mr. Dexter Man has been active in various professional associations such as the Hong Kong Building Construction Association, the Hong Kong Institute of Engineers, and the Hong Kong Management Association. He can lay claim to being the architect, designer and builder for over thirty high-rise buildings, mainly in the Western District.

There are many successful businessmen in Hong Kong, and indeed it is not for his business acumen or success at wealth acquisition that we are honouring him this afternoon. Rather it is for his philanthropy and generosity of spirit. Like Bacon, Mr Man realized early that "money is like muck, not good unless it be spread". He has been very active in multifarious community organizations. He was a director of the Tung Wah Group of Hospitals and the Po Leung Kuk in the 1960s and has served the Lions Club of Tai Ping Shan, the Community Chest District Organizing Committee in various leadership capacities.

Affable and friendly, Mr Man is a firm believer in organizations which forge a spirit of comradeship and camaraderie. He was one of the founders of the Po On Commercial Association, of which he was Chairman in the 1970's; he has been Hon President of the Po On Fellowship Association and also the Man Clansmen Association. He has even taken time out from his busy schedule to research the life and sufferings of arguably the best-known figures in Chinese history with the surname Man, namely Wen Tianxiang, author of the "Song of Righteousness".

Dexter Man's belief in the "bonds that tie" the spirit of good fellowship, his genial personality have led him to play a significant role in the development of the Hong Kong University Alumni Association. He has done more than possibly any other alumnus to make it possible for alumni to develop a sense of solidarity through enjoyment, through having fun" together. For this the University owes him a debt of gratitude. Mr Man's loyalty to the University is based on a simple premise: his alma mater has trained him; he has been able to make money; it is only right that he should give some back.

As the President of the Alumni Association in Hong Kong in 1973 he took the initiative to buy the $2.4 million Association premises in the Central District. He arranged the mortgage and donated $300,000 and headed the Club Premises Fund Raising Committee. Alumni who now enjoy a meal or a game of mahjong or just a chat with friends in the convivial environment of the Association's premises conveniently located in the heart of Central have Dexter Man to thank for the privilege. Mr Man himself remains active in the Association's affairs, and he and his cronies are regular patrons of the Association's restaurant. A room in the club premises was named the Dexter Man Room in his honour. The Hong Kong University Alumni Association Executive Committee meetings are held there. For short, the room is often intimately referred to as the 'Rant Room'. Dexter Man has served as a member of the Court of the University. He was also Chairman of the International Liaison Committee of the Hong Kong University Alumni Association from 1988 to 1992 and successfully introduced and co-ordinated the setting up of the many alumni associations around the world. Himself an avid race horse owner, Mr Man has managed the HKU Alumni Association Racing Syndicate for many years. Loyalty to the University seems to be in the genes: One of Dexter Man's daughters, Irene, has also served as HKUAA President, while another, Evelyn, is an active leader of the Toronto chapter of the HKUAA.

Mr Man is a great believer in education, and in the University's ability to provide it. Of his eight children, Irene and Evelyn were educated at the University of Hong Kong. He is a founding member of the University of Hong Kong Foundation for Educational Development and Research and made a generous donation of $20 million towards the Foundation in 1995, and in 1996 $10 million for the rebuilding of Morrison Hall, a HKU hostel, as he is an old Morrison Hall member. His other contributions include being a Diamond Patron of the University's 80th Anniversary Celebrations and C$20,000 to the Alumni Association of Ontario, Canada, for establishing an educational scholarship.

In recognition of his contributions to the University, he was awarded an Honorary University Fellowship in 1995, the year when the Fellowship was established. As a reference to one of the early products of his factory, his race horses have been named according to a "lantern" series. The latest in the series is Bright Lantern; in a sense this name is appropriate; Dexter Man's contributions to the Hong Kong University alumni have brought them the bright light of good fellowship.

Mr Pro-Chancellor, for his services to the University and its alumni networking, I present Mr Dexter Man Hung-cho for the degree of Doctor of Social Sciences honoris causa.