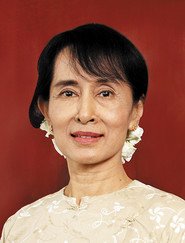 Following in the footsteps of Mahatma Gandhi and Nelson Mandela, Daw Aung San Suu Kyi stands as a shining icon and global inspiration for peaceful resistance to harsh repression. More specifically, she symbolises Burma's struggle for democracy. She has spent almost one quarter of her life in detention in the cause of freedom and democratic change.

Daw Suu (as she is respectfully addressed by her compatriots) was born in 1945, the daughter of Burma's independence hero General Aung San who was assassinated when she was only two years old. She was educated in Burma, India and the United Kingdom. Whilst studying philosophy, politics and economics at Oxford University she met her future husband Michael Aris and the couple had two sons, Alexander and Kim. Having spent time working and studying in Japan and Bhutan, she settled in the UK to look after her family. But Burma was never far from her thoughts.

In 1988 Daw Suu returned to Burma to care for her sick mother. This was a time of political turmoil and very soon she became actively involved in her country's uprising in support of democracy. Indeed she said in a speech in Rangoon in August 1988: "I could not, as my father's daughter, remain indifferent to all that was going on". A new party, the National League for Democracy, was formed with Daw Suu its General Secretary. Inspired by the non-violent campaigns of US civil rights leader Martin Luther King and India's Mahatma Gandhi she organised rallies and travelled round the country calling for peaceful democratic reform and free elections.

However, a military coup soon took Burmese politics down another path and in July 1989 resulted in the first of what were to be three terms of house arrest for Daw Suu. Although a general election was held in May 1990, Daw Suu was not able to participate. Notwithstanding her detention the National League for Democracy won an overwhelming victory. The incumbent dictatorship, however, refused to recognise the result and, using ever increasing repressive measures, clung to power.

Shortly afterwards Daw Suu was awarded the Nobel Peace Prize in 1991. In his presentation speech Francis Sejested referred to her as "an outstanding example of the power of the powerless". With the prize money Daw Suu established a health and education trust for the Burmese people.

She remained under house arrest for six years until July 1995. Sadly Christmas 1995 was the last time she saw her husband. Further requests for him to visit her in Burma were refused and Michael Aris died four years later of cancer. The Government's tactics in refusing him a visitor's visa were clear: they desperately wanted Daw Suu to leave Burma to join her family overseas, but she always refused knowing that, if she once left, she would not be permitted to return. This led to the heart-rending dilemma, so clearly shown in the film "The Lady", between her duties as a wife and mother as against her duty to her people. She bravely decided that her devotion to her country had to take precedence over her love for her husband and children.

In 2000 she was subjected to her second spell under house arrest after repeated attempts to leave Rangoon to conduct political meetings in other parts of the country.

Daw Suu was again released in 2002 as part of a deal negotiated by the United Nations Envoy to Burma Razali Ismail. She travelled the country holding meetings attended by tens of thousands of people thereby dashing the hopes of the military that, after her long period of detention, she would have slipped into political oblivion and support for her democratic cause would have waned.

The situation in Burma then revealed one of its especially dark sides. A political militia, set up and organised by the military with Than Shwe as its President, began to harass and attack those attending meetings of the National League for Democracy. In May 2003 the atrocities culminated in a violent attack on a convoy of vehicles in which Daw Suu was travelling. This was a clear attempt by the military to assassinate her using the cover of a civilian front. It failed. More than seventy of her supporters were killed but her driver managed to take her to safety. This attack became known as the Depayin Massacre.

Following the attack Daw Suu was placed in detention for a third time. Conditions of house arrest were far more serious than the two previous occasions. Her telephone connections were cut and the volunteers from the National League for Democracy who provided her personal security were removed. Even UN Secretary General Ban Ki-Moon was refused permission to see her when he visited Burma in 2009. She must have been desperately lonely.

In May 2009 came the well publicised occasion when John Yettaw, a United States citizen, swam across Inya Lake to visit her. She was subsequently arrested for breaking the terms of her house arrest and sentenced to three years imprisonment, immediately commuted to eigtheen months house arrest.

Being under house arrest Daw Suu was prohibited from participating in the general elections held in 2010, the first in Burma for twenty years, but she was released six days later. With undiminished determination Daw Suu resumed active political involvement towards achieving her goal of democratic reform and respect for human rights.

There is still a long way to go but one cannot but believe in the inevitability that the devotion of this wonderful human being to justice and freedom will ultimately prevail.

Daw Suu's influence has been and remains truly global. She is an inspiration to us all. In the vivid words of Archbishop Desmond Tutu:

Perhaps it is appropriate to end this citation with a quote from the Norwegian Nobel Committee:

"Suu Kyi's struggle is one of the most extraordinary examples of civil courage in Asia in recent decades. She has become an important symbol in the struggle against oppression".

Mr Pro-Chancellor, it is my honour and privilege to present to you Daw Aung San Suu Kyi for the award of Doctor of Laws honoris causa.