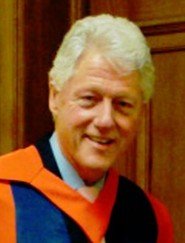 Thank you very much Chancellor, Vice-Chancellor, members of faculty and guests.

And I must say that Professor Wilkinson, I was very impressed. I have never been to an institution that has a public orator before. But you have done a superb job. I must suggest that to every in every college and university in the United States. I must tell you that I am  also really honored to be here with the Chancellor, who's day job is the Chief Executive here in Hong Kong.

I will never look at him in the same way again. I will always imagine him on the throne from now on. (Laughter)

Let me also say what a great honor it is to share this distinction with Dr. David Ho, one of the people that I most admire, for his untiring efforts to solving the mystery of HIV and AIDS.

The outline of what we have been trying to do have been given in a very straight forward way by the public orator. I would like to put this into some context. First of all, thanks to the enormous efforts of governments throughout the world to create a fund for the cure of AIDS, TB and Malaria, and especially to the work of the current American government – in the issue in which we are in the most agreement – drastically increasing funding from the United States to combat AIDS and Malaria.

We are perhaps treating about 3 and a half million people in the world per day.

An enormous number of people are being treated today because of contract, our foundation has negotiated. Principally, they are the lowest-priced available in the world and they make the money go further and save more lives.

But I would like to ask you to think about this. As the great minds that we look to and honor, like Dr David Ho, continue to look for solutions for this problem, those of us with lesser skills but equal energy, passion and concern have to think about how to use the resources that we have to save more lives.

We can do that with HIV and AIDS. It is no longer a question of the affordability of the medicine.

We now have pots of money available, even in this economic downturn, that can be used to purchase most of the medicine for most of the poor people in the world.

But with AIDS medicine, you can't simply fly over a remote village and drop it out of a parachute, and pretend that everything will go right.

There has to be testing to see if people are HIV positive. Someone has to monitor the administration of the medicine. Then you have to check if it is working or if you have to change the doses.

And after a certain period of time, most people find that the original medicine is no longer effective and they have to go to the so-called second-line drugs which are more expensive, because not so many need them.

We have to make sure all the children of the world, particularly in the remote rural areas who need this to stay alive, get it.

And we know we can prevent virtually all the transmission from HIV-positive mothers to their children if we simply get to them in time and give them simple and inexpensive medication.

The point I wish to make is this. For all of you who care about this, the biggest impediment now to maximizing the efforts against this disease, based on the tools we have, is the absence of effective health systems in poor areas, especially in poor rural areas in the world.

Therefore, it is urgent that those who care about this invest their money in helping to find the most cost effective way to get basic health care into those areas.

We use AIDS to go in those areas where we can find help with Malaria or TB or town health or rare tropical diseases.

But this is a huge problem around the world. When our foundation first began our work in China, we were asked to go to rural areas where contaminated blood transfusions were responsible for most of the infections.

I was personally asked by the Chinese government to appear on television to help to overcome the stigma of AIDS, and I am always too happy to be there.

We are pretty much past all those early drawbacks in those places.

We need people who are trained to provide basic healthcare including the testing, the prevention and especially the prevention of mother and child infection.

And so I say that – out of gratitude to the opportunity that I have had to work in China, India, Vietnam, Cambodia, Papua New Guinea and all over Asia, in most of Africa and the high infection rate countries – in order to fully overcome this epidemic with the existing tools, we are going to have to get people health systems that can also keep more babies alive and combat other problems.

It can be done with not much money, but the world cannot afford to be complacent in a face of this challenge.

The 2nd point I would like to make is that the public orator was kind enough to say that we now make available this medicine at the world's lowest prices in more than seventy countries.

I think next year, when the new American government comes in, we will be able to see even more people on treatment because I think they will pursue the most effective possible course.

But this is a point of general implication I want to make, since we are in a university. And the only other point I want to make, because Hong Kong is known as a place that works, and is in constant flux, open to change. I was thinking to myself when I learned that this is the 92nd year this ceremony had been held and which these degrees have been extended.

I wish I had a list of every single person that came before me and a slight biography, because I am sure it would tell the story of the remarkable transformations of the 20th Century.

When we deal with public issues, whether its AIDS, or access to education, or how to come out of this current economic spiral, we know the danger is deflation and asset dropping. We normally say: here is how much we have to do and how much money we have to spend on it.

We don't devote nearly enough attention in the challenge of difficult and common problems in going to the next step, which is HOW to do it.

The world is now beginning to work on the successor of the Kyoto Protocol on climate change. You might remember ten years ago when we did this, the US and China were involved in this, they disputed, India and the developing nations agreed on binding limits on greenhouse gas emissions.

And the great tragedy of Kyoto was after the US and my administration took a big leap in negotiating it, then the government came after me pulled out of it. That was bad. And everyone who cares about climate change knows that.

But the second worst thing that happened, that nearly nobody knows about, it is that 170 nations signed that climate change accord, promising to drop their greenhouse gas emissions by certain factor below their 1990 levels by 2012. The only nations for which it was easy was those formerly Communist countries in Central and Eastern Europe, including Russia, that had a economic collapse after 1990, so when they rebuilt their  economy, they were still below their emission levels.

The other 155 nations had to try. Here is the tragedy. Only 6 of the countries that signed the Kyoto Accord would actually achieve their greenhouse gas reductions, and unbelievably they are among the most successful economies of the world. Because they did it. But they devoted time to thinking, not just we what we have to do, and how much money we have to spend, but HOW can we do this.

This whole award ceremony, in terms of my foundation, and I have a lot of help doing this, is basically produced by simple idea: the aids drug market was wildly inefficient when I started working on this.

In 2003 an epidemic we have been confronting for more than 20 years had no organization in the pricing and delivery for the AIDS medicine. Medicine that has been sold generically for 500 dollars sold for 35 hundred dollars in the Bahamas, and was not available at all in other places, and the volume was pitifully small.

It was in short, a high profit-margin, low-volume, uncertain type of business.

All the kind words that were said moments ago by your distinguished orator, come down to this: we convinced the major manufactures of AIDS medicine to shift their business plan. To make low profit-margins, very high volume, and immediate service payment businesses with efficient distribution.

That's all we did. And so for a tiny fraction of what most governments spend, we now have 1.4 million people on treatment because there was more attention devoted to HOW to do this.

The Universities are places where people should be given the support and the resources necessary not only to solve the genomic mysteries that will give us an answer to an AIDS cure, and all matters about the problem, but how to solve our common social problem.

I am honored by this degree and have no right to issue any challenge to you.

But people who are younger than I am, who are more full of ideas, who understand systems better: I think we have not maximized our ability to figure out how to do what we all agreed to want to do, and we what are perfectly prepared to spend money doing.

That can be the great triumph of the universities in the 21st century.

You can save the world from climate change, you can save more people from mass epidemics, you can enable us to thank economic mechanisms that will spread equality of opportunity instead of inequality, in the process reduce the horrible conflicts you see all around the world, manifest most recently in the tragedy our friends in Mumbai has faced. We need that from all of you.

And in the meanwhile I will cherish this award for the rest of my life.

(Transcript by the University of Hong Kong)