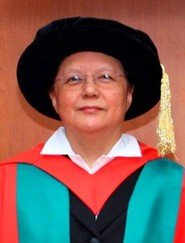 On behalf of my fellow honorary graduates and myself, I wish to express our sincere gratitude to the university for conferring honorary degrees on us, and for the Orators' generous citations. We are a group of mixed talents, with different backgrounds, from different professions, and even speak different languages. But from this day onwards, there will be a strong bond between us, and that bond is "the University of Hong Kong".

Our University had advanced considerably since I was an undergraduate. The student population in those days was around 3000; today, this figure stands at 23400. In 1964, there were the Faculties of Arts, Science, Engineering, and Medicine, but the Faculty of Social Sciences was nowhere to be found.  Fortunately, the university quickly established the Faculty of Social Sciences a few years later, otherwise, four of us on the stage today, including myself, would experience some difficulty in getting our degrees in Social Sciences. Over the years, our university moved towards the central stage of the academic world and gained recognition as one of the best known universities of the world, and in particular, Asia. Credit must be accorded to the University Council, successive Vice-Chancellors, staff and alumni of our university, for their untiring efforts over the years. I have every confidence that our university will achieve further heights under the leadership of our current Council Chairman and Vice-Chancellor.

As Hong Kong faces the international financial crisis, many of our graduating students are worried about their job prospects. Rightly so. They have many questions on their mind. Some of these questions will no doubt be related to how the United States and European governments can control the spread of the crisis and revive their respective economies. For such questions, I defer to my learned fellow graduate, Dr Lam Shan Muk, whose analysis of financial issues is widely read and well respected. If the graduating students' main concern is about not getting the desired job and pay, perhaps what happened to our 1969 Civil Engineering graduates may be of interest.

In the summer of 1969, the construction industry in HK was at a standstill, and there were simply no new projects. I was working in the University Appointments Service as a careers counselor at the time. Many of the new graduates who came to talk with me expressed their worries and concerns. At the end of our discussions, most of them arrived at the conclusion that it would be more desirable to work in any available jobs, in order to gain working experiences and widen personal visions. In this way when the market did turn around, they would be better equipped in life skills than before, and therefore would be more competitive candidates for the desired posts. The construction industry did bounce back in about a year or so and then enjoyed a boom. I believe these graduates entered their selected profession after a delayed commencement, but those twelve to eighteen months at the beginning of their career were not wasted and were of great use to their future development.

Another point that emerged during these discussions is the realisation that the education they received at the university not only enabled them to build bridges, highways or multi-storey buildings; but more importantly, helped them develop a methodology of thinking and doing things. This process would be useful in all other activities that they might engage in for the rest of their lives.

My personal experience bears witness to this concept. In the Science Faculty, we conducted experiments in the laboratories every week. I learnt to follow the steps without deviation, observe the changes carefully, record the results objectively, and evaluated the conclusions against the hypothesis. Quite often, my experiment did not come up with the desired result, so I had to go back and find out where I went wrong. It did not matter how much I wanted the experiment to work, it did not matter how impatient I was. I had to accept what the hard facts tell me. If the experiment failed, I had to start again from the beginning, and my personal feeling did not matter one iota. The need for meticulous observation, the respect for objectivity, the control over my own inclinations, and the step-by-step discipline, were important practices instilled into my character through my education in this university, and they have served me well up to the present day. I should perhaps add that these traits were particularly helpful during my term as the President of the Legislative Council. If I had not studied science, I really cannot be sure if I could have kept my own feelings at bay, and proceeded with the often complicated and delicate rulings in such a matter-of-fact and calm manner.

Allow me now to turn to another page in my relationship with this university. After graduation, I was fortunate in getting employment with the Appointments Service of the University. This opened a totally new world to me. There was so much information on the companies in the business sector and the various government departments, which were all employers of HKU graduates. Every file that I browsed through contained the profile of an organisation. I had to remember all the contents, or at least the significant ones. That was hard. But for a Science graduate who was used to memorising pages and pages of formulae, that was still feasible. My work also involved counselling students who came for advice on career planning and job seeking. In order for me to be better equipped, my supervisor, Miss Beryl Wright, advised me to take a course in Personnel Management and pursue further studies in Psychology. I did both. The study of personnel management enabled me to see things from the personnel managers' position, thereby helping me to communicate with prospective employers of our graduates on a more similar wavelength. The study of psychology helped me to appreciate that everyone has their own personal concerns. The behaviour of certain individuals which in the past was incomprehensible to me is now understandable when I approach the issue from their point of view.

At this point, Mr Pro-chancellor, I hope you will allow me to pay tribute to my supervisor in Psychology, the learned Reverend Eric Kvan. Throughout the three years during which I was his student, he never failed to spot the fallacy in my presentations, and he insisted that I had to support my hypothesis with objective and concrete evidences. While I suspect he knew most of the answers, he made me search and seek them out for myself. It was a mind sharpening exercise and intensive learning experience. I am eternally grateful to him for giving me so much of his time so patiently, and so persistently pushing me to reach the required standard.

By now, Mr Pro-chancellor, I think the point is crystal clear. At the risk of boring our learned audience, let me reiterate that university education is the training of one's mind, the process of developing the potentials in each student, the formation of positive attitudes, the gaining of insight into one's own strength and weaknesses, and the ability to understand the needs of others.

To be honest, I never thought much of myself before I was forty. It therefore came as a total surprise when Professor Douglas Payne, the then Dean of the Science Faculty and Head of the Chemistry Department, told me in 1967, that he thought I shall "make a mark" in future. I could not recall how I responded to this. I only remembered that I was confused because I could not believe he thought so highly of me. At the first opportune time, I searched the dictionaries to find out the exact meaning of the phrase "make a mark". When I finally confirmed the meaning, and the message sank in, I felt diffident and wondered if I could ever stand up to Professor Payne's assessment.

Standing here today, memories flood my mind. I would not be here today if I had not had the good fortune of having excellent teachers in my secondary school, St Stephen's Girls' College, and in this university. Many people had lent me support over the years, colleagues, family, classmates, friends, and members of the public. In bestowing this honour on me today, the university is recognising the contribution of all those who have helped me, and also honouring the way this university educated her students as well as the endeavour of her staff in enlightening the tens and thousands of young minds.

Education is pivotal to the sustained development of our Hong Kong, it has always been, and it shall always be.

Mr Pro-chancellor, I thank you for your indulgence in allowing me to speak, and through you, may I convey, on behalf of all the honorary graduates, our sincere appreciation to the University of Hong Kong for this great honour.