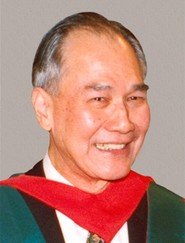 It is a pleasure and an honour for me to be here with you at this Congregation. The University of Hong Kong has decided to confer upon six individuals honorary degrees in various disciplines. In representation of those six individuals, I have been invited to address you today.

The six recipients are men and women who, each in his or her own right, has contributed in profound and lasting ways to the betterment of society. Their contributions, in the fields of community service, social development, public service, economic development and the fine arts, speak for themselves. Of diverse nationality and background, they share one common trait - their commitment to the improvement of their societies and their determination to work towards a more prosperous, just and secure world.

I am proud to have been selected for inclusion among such a distinguished group of individuals. I share their pride and humility in accepting this distinction - one that gives recognition to the leadership role that each of us has been privileged to play and that we will certainly continue to exercise in our respective areas of expertise so long as providence wills.

Jean Monet, the father of 'unified' Europe. Once said that there are two kinds of people: those who want to be something and those who want to do something. The distinction between those mind sets, those contrasting visions of what life is all about, is fundamental.

It is self-evident that the vast majority of humanity in today's world clings to self-serving values in pursuit of personal interest. For those people, doing is a means of being. On the other hand, there are those who, imbued with a sense of idealism by vision and energy, work for the collective interest. For those people, doing is the very essence of life, an it is their leadership that drives development. The recipients of today's honorary degrees exemplify that quality of leadership. They stand before you as models on a 'lifestyle' that you, too, can adopt, if you simply will it so.

University graduates today are far better equipped with the knowledge and skills to effect change than those of my generation. A university degree, however, is by no means a guarantee of success in life. It is all too easy to fall prey to the notion of 'credentialism', the view that social status and occupational position derives from the academic degrees accumulated. It is not the degree, but what you do with it that counts.

It is my hope that you, the graduating class of the University of Hong Kong standing upon the edge of a new millennium and a new China, will use your learning to serve the public interest. Today, like never before, opportunities for public service beckon you with open arms. That is because we are witnessing today a remarkable trend throughout Asia: a rapidly expanding role for civil society in development.

The move towards more open societies has been associated with widespread disenchantment with ineffective and inefficient governments. But government cannot be abandoned; rather, as is being attempted in the United States and elsewhere, it must be 'reinvented'. The clarion call of the people for 'good governance', centring on efficiency, accountability and transparency in the activities of government, is directed to you ear.

It has always been my belief - and my practice while serving in public office - that governments must promote transparency, predictability and an open environment that provides opportunities for informed political and productive economic and social participation by all. Good governance depends ultimately upon the responsiveness of all public institutions - the legislative, administrative and judicial - to the needs and concerns of the people. A public that is educated, well-informed, politically aware, and committed to democratic principles is the key to good governance. It is that reality that is referred to in the aphorism: 'Each people gets the government it deserves'.

All of you have a stake - and a responsibility - for the future development of Hong Kong, China, Asia and the world. Each of you will have an opportunity for public service, in any of a wide variety of capacities. As responsible citizens, you must ensure that the economic and social resources of your communities are managed with efficiency, effectiveness and integrity. That can only be done through your active participation in the institutions and process that govern your lives.

I hope that the future will afford you the opportunity to do just that.

On behalf of all the honorary degree recipients, I wish you every success in you endeavours.