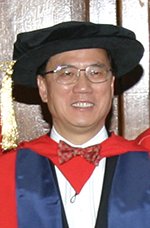 It is a great pleasure to join you today in such magnificent surroundings and among such esteemed company. I accept this Honorary Degree with a humble heart, because I know that I did not earn it all on my own.

The Honorary degree reflects the dedication and team spirit that is a hallmark of our government, in particular the civil service that I was a part of for more than three decades. Throughout my entire career I have worked with many people whose driving force and passion has been to serve the people of Hong Kong. I know that remains as true today as it did almost 40 years ago, when I first entered government service. So I must acknowledge that I am here today receiving this honour, principally because of the guidance, the opportunities, and the experience I have been fortunate to have during my time in public service.

The past couple of weeks have been some of the most momentous in Hong Kong. And I now find myself in the hot seat.

Hong Kong is most certainly a beguiling place. What is it about Hong Kong that sets us apart is our ability to sustain social stability and economic growth. One key element of our success is the institutions that buttress our development. And this is what I want to talk about today. These institutions include the Executive authorities; our legal system, underpinned by an independent judiciary; our legislature; and, our civil service. Each operates independently, but is an integral part of the whole. It is a system of government not unlike many others. But, we do have our distinguishing features.

We have a very international-minded and outward-looking government. This is because we were plugged into the world market long before 'globalisation' became part of the lexicon. Within the ranks of the civil service and the judiciary you will find nationals, for example, from Britain, Australia, the United States, Canada and India. Our Court of Final Appeal can call on some of the most esteemed minds from the common law world. I am honoured to be sharing the podium this afternoon with one of them, Sir Anthony Mason. We have a large foreign population in Hong Kong and one of the world's largest consular corps. International chambers of commerce play a very active and vital role in government consultations. And our Basic Law even allows for foreign nationals to be elected to one-fifth of the seats in our legislature.

I recently had the pleasure of presenting awards for an essay competition in which we asked people to write about what they loved about Hong Kong, Asia's world city. Nearly all those who took part mentioned that our multi-cultural makeup and international outlook were among the best things about our city. One of the winners, a Eurasian teenage boy, said he felt more at home here than anywhere else in the world. Locals said that living and working with people from different countries made Hong Kong a more interesting and special city.

These tenets of tolerance and respect are also reflected in our approach to government. As a government, we are committed to dialogue and compromise. This is the only way to balance the many competing demands and opinions that pervade public business. Good government is not a competition. It's not about winning or losing. It's not about whose view or will prevails. It is about making the best decisions for the community as a whole. And, inevitably, this will likely involve compromise.

Good government is about communicating the core values that underpin your administration. I have often referred to what I call the four pillars of Hong Kong's success - the rule of law upheld by an independent judiciary; a level playing field for business; a clean and efficient civil service; and, the free flow of information. These are values that we simply will not compromise. To do so would signal the beginning of the end for Hong Kong.

Since Reunification in 1997 we have had the added safeguards of the Basic Law as a foundation for development. Our constitutional document gives effect to the concepts of 'One Country, Two Systems' and 'Hong Kong people running Hong Kong' with a high degree of autonomy.

For people like myself, and the Principal Officials who are leading the government, the concept of 'Hong Kong people running Hong Kong' is very real. It is something we deal with on a daily basis. I know the same applies to our legislators, our judges, and our civil servants. They represent groupings with an open system, allowing all Hong Kong people to compete and join on a level-playing field. Those who have been chosen are entrusted to 'run' Hong Kong. They share a common mission to maintain the stability and prosperity of our city. It is without doubt an onerous and solemn undertaking. It can be an uplifting job one day and an extremely frustrating experience the next. But, above all else, it is an honour and a privilege to play such a role in our society. And I know that the vast majority of people with whom I have ever worked, be they principal officials, legislators, judges, civil servants, would feel the same. They are driven by the simple desire to do what's best for Hong Kong. No hidden agendas, no quid pro quo - simply trying to make Hong Kong a better place for us all. We strive to ensure that the people of Hong Kong - and their many diverse views - remain the focus of our governance. Certainly, 'serving the community' remains the guiding principle of the civil service, as it is for the government leadership.

As society has become more sophisticated, it has also become more complicated, multi-faceted and pluralistic. Government can no longer afford to look at problems as stand-alone entities. As a result, the way that government operates needs to be de-compartmentalised and flattened, as well as streamlined. This is an extremely difficult task, given the fact that some of our systems have been in place for many, many years, very often entrenched in law. But we are working at it.

Good government is also about sharing a vision of the future with the community. People need to understand the purpose of what you're trying to achieve and the thinking behind our policies as a whole. Many of you will know that we have a vision to develop Hong Kong as Asia's world city. This is an all-encompassing brief - it covers everything we do as a community and an economy in areas ranging from international trade to art, culture and tourism. In many areas - for example, financial services, infrastructure, communications technology, tourism - I would say we have achieved world city status. Our community shares this vision. Hardly a day goes by when we don't read something in the local press that refers to our positioning as Asia's world city. More often than not, it is when people feel we have not lived up to the benchmark expected of a world city. But this in itself is a good thing because it keeps us on our toes, it makes us constantly reassess our performance. It makes us want to do better. Hong Kong has never been a city to stand still - status quo is simply not an option for us.

The Basic Law is also a visionary document. It lays down the foundations for our development over a 50-year period. It provides a legal basis for us to position ourselves as Asia's world city. It gives us the freedom and the power to do this, on our own. It also embodies the depth of Central Government support for Hong Kong. It is central to the good governance of the Hong Kong SAR.

Ladies and gentlemen, let me just sum up with what I believe are some of the key ingredients of good government: tolerance and respect; inclusiveness; communication; responsiveness, openness, accountability, progressiveness and a shared vision. I believe that these values are deeply woven into the fabric of our government. They have made Hong Kong one of the world's most open and dynamic cities. But as society becomes more open and thrives on diversity, our challenge revolves round our ability to forge consensus and accommodate differing views so that most of our people are happy with what we do. Our government is facing up to this challenge. But it is a young government and has learned a few lessons since 1997. And we must give it a chance to mature.

I feel an enormous sense of pride when I talk about Hong Kong. Our people have achieved so much for such a small place. We have been blessed with a prime location. We have one of the world's savviest populations. And we have the constitutional and institutional foundations to sustain our growth and development. Now, eight years after reunification - with our country growing and modernizing at a phenomenal rate and the Central Government selflessly supporting us throughout - we are poised for even bigger and better achievements.

Thank you once again for asking me to be here today. It is, as I said earlier, a great honour for me, and for the system of government that has been the centerpiece of my whole working life.