The University of Hong Kong (HKU) will confer honorary degrees upon four outstanding individuals at the 201st Congregation to be held on April 2, 2019 (Tuesday) in the Loke Yew Hall, Main Building of Main Campus.

Chief Justice Ma was born in Hong Kong in 1956. He holds a Bachelor of Laws degree from Birmingham University in the UK, and completed the Bar Finals in 1978. He was called to the English Bar (Gray’s Inn) in 1978, the Hong Kong Bar in 1980, the Bar of the State of Victoria in Australia in 1983 and the Bar of Singapore in 1990.

He began his private practice in 1980, practising in Hong Kong and in Singapore. Chief Justice Ma has wide legal experience in various areas of the civil law. His main areas of practice were: arbitration, commercial (including shipping, admiralty, banking, insurance), company, building, administrative and constitutional law. He was appointed Queen’s Counsel in 1993.

He was appointed Chief Justice of the Court of Final Appeal in 2010.

At the University of Hong Kong, Chief Justice Ma has served as an Honorary Lecturer in the Department of Professional Legal Education of the Faculty of Law since 1987 – generously sharing his expertise and experience with students and faculty members for over three decades.

Chief Justice Ma was awarded the Grand Bauhinia Medal in 2012. 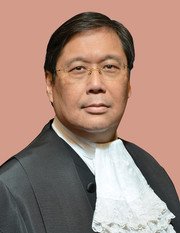 Mr Justice Ribeiro is a Permanent Judge of the Court of Final Appeal of the Hong Kong SAR Judiciary.

Mr Justice Ribeiro was born in Hong Kong in 1949 and was educated at La Salle College before reading law in the United Kingdom. He obtained his Bachelor of Laws (1971) and Master of Laws (1972) degrees from the London School of Economics. On returning to Hong Kong, he taught as a Lecturer in Law at the University of Hong Kong from 1972 to 1979. These were the early days of Hong Kong’s first law school, and Mr Justice Ribeiro was instrumental in helping to lay down the foundational principles of the teaching of common law and in nurturing the values of the rule of law in his students.

He was called to the English Bar at the Inner Temple and to the Hong Kong Bar in 1978 and entered full-time private practice in Hong Kong in 1979, practising generally in the field of commercial law. He was appointed Queen’s Counsel in 1990. While at the Bar he served on the Bar Council. He also served as a member of the Operations Review Committee, an oversight committee of the ICAC, until 1999.

Mr Justice Ribeiro was the Vice-Chairman of the Chief Justice’s Working Party on Civil Justice Reform and drafted the Interim and Final Reports on which the procedural reforms adopted in 2009 were based. From 2008 to 2014, he was a member of the Judicial Officers Recommendation Commission which recommends judicial appointments. He presently chairs the Judiciary’s Committee on Information Technology.

Dr David Sin Wai Kin is a pioneering business leader whose commercial interests and influence range from the jewellery sector to property development, rental property, hotel operations, and even banking and finance.

While his own education was halted at a very young age due to the Second World War, Dr Sin has been a strong advocate for higher education in Hong Kong and Mainland China.

In recognition of his contributions to Hong Kong and academia, the University has resolved to confer upon him the degree of Doctor of Social Sciences honoris causa.

Professor Andrew Michael Spence is a Nobel Laureate in Economic Sciences, and a world authority on growth in developing countries and on the convergence between advanced and developing economies.

At the University of Hong Kong, Professor Spence co-chairs the Advisory Board of the Asia Global Institute and is a Member of the AsiaGlobal Fellows Faculty Committee.

Professor Spence was awarded the John Kenneth Galbraith Prize for excellence in teaching and the John Bates Clark Medal for a "significant contribution to economic thought and knowledge."

In 2001, Professor Spence received the Nobel Prize in Economic Sciences for his path breaking work in the field of information economics.

He has served as the Chairman of the Independent Commission on Growth and Development created by the World Bank in 2006, and on the Board of Directors of many private companies. He was a Member of the Board of the Stanford Management Company, which manages the Stanford University endowment, and the International Chamber of Commerce Research Foundation.

At the Congregation, one of the honorary degree recipients, the Hon Chief Justice Geoffrey Ma Tao Li will deliver the acceptance speech on behalf of the honorary graduands.

*Note: Photographers are reminded to bring their long lenses and not to use flashlight inside the Hall.