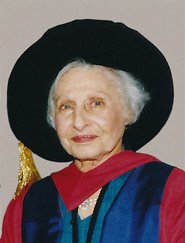 Lady Kadoorie is the widow of Lawrence Kadoorie who was knighted by Her Majesty the Queen in 1974. In 1981 he became the first person born in Hong Kong to be granted a peerage.

In memory of Lord Kadoorie the family has made significant donations to the construction of a Biological Building at the University of Hong Kong – due to be completed in mid-1999. The building will be named the Kadoorie Biological Sciences Building.

Lady Kadoorie is a staunch supporter of the Jewish Community of Hong Kong, the Hong Kong Philharmonic, and the China Coast Community. She is also a generous benefactor of many overseas charities and a Patron of the Hong Kong Soong Ching Ling Children’s Palace and Trustee of the Kadoorie Charitable Foundations.

In recognition of her services to education and the community of Hong Kong, the University has resolved to confer upon her the degree of Doctor of Laws honoris causa.