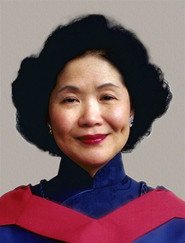 Mrs Anson Chan is the first Chinese and first woman to hold the position of Hong Kong's Chief Secretary, having been appointed in November 1993 to break a tradition where all her predecessors for 150 years had been British. As head of Hong Kong's 190,000-strong civil service, Mrs Anson Chan is responsible for the effective implementation of the whole range of the Government's policies. She joined the Government in 1962 and has held many senior positions dealing with finance, economics, commerce and industry. Mrs Chan was born in Shanghai and moved to Hong Kong with her family in 1948. She later graduated from the University of Hong Kong and was made a Commander of the Order of the British Empire (CBE) in the Queen's 1992 New Year's Honours List.

In recognition of her achievements and contributions to Hong Kong, the University has resolved to confer upon her the degree of Doctor of Laws honoris causa.