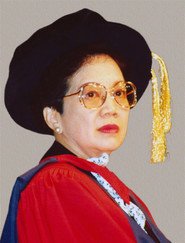 Mrs Corazon C Aquino, or Cory, as she is affectionately known throughout the Philippines, was born in 1933 in Manila and received her education there and in the United States. She married Benigno S Aquino Jr in 1954 and later had five children.

When martial law was imposed on the Filipino people in 1972 her husband was a prime victim and along with other opposition members was confined in a military jail. The event changed Mrs Aquino from a quiet but supportive wife to an active figure in politics.

During the later time when her husband was receiving medical treatment in the United States they perfected a political partnership which formulated a resistance to the existing Government but which was to end with his being assassinated within minutes of his home coming to the Philippines in 1983.

Mrs Aquino went on to succeed her husband in the role of opposition leader in the volatile political situation which had developed in the Philippines and later led the country as its president. During her years in office she did much to try to make the holder of the position more accountable to the people and also introduced many measures to reverse injustices in Filipino society, particularly with regard to land distribution and the rights of peasant farmers.

She survived many attempts to overthrow her Government and with courage and quiet determination saw out her term of office and handed over the presidency to a democratically elected successor who is continuing the moves towards democracy, greater social freedom and economic prosperity she was so instrumental in introducing.

In recognition of her services in politics and government, the University has resolved to confer upon her the degree of Doctor of Laws honoris causa.