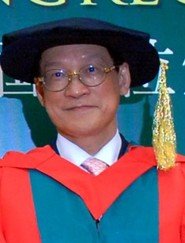 Professor Edward Chen Kwan Yiu, former President of Lingnan University, is an Honorary Professor and Distinguished Fellow of the Centre of Asian Studies at the University of Hong Kong.

Professor Chen received his first and second degrees from HKU and his doctorate in Economics from Oxford University. Starting as a graduate teaching assistant at HKU in 1967, he became the Director of the Centre of Asian Studies in 1980 and a Chair Professor in 1986. He was President of Lingnan University from 1995 to 2007, devoting himself to the building of a liberal arts university. He was held visiting appointments at Yale, Oxford, Stockholm Universities and the University of California (Davis Campus), and has served as a member of Time magazine's Board of Economists. Professor Chen is widely recognised as a pioneer in the study of Asia's newly industrialised economies.

In recognition of his invaluable contributions to the Hong Kong community and to academia, the University has resolved to confer upon him the degree of Social Sciences honoris causa.