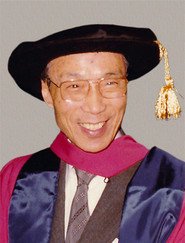 Sir Run Run Shaw's connection with the film industry started fifty years ago in Shanghai in the era of silent motion pictures. Today Sir Run Run is Chairman of Shaw Brothers (HK) Ltd which occupies an eminent position in international movie circles. He is also Vice-Chairman of Hong Kong Television Broadcasts Ltd and Managing Director of some forty local and overseas companies.

He was awarded the Commander of the Order of the British Empire (CBE) in 1974 and a Knighthood in 1977.

In recognition of his achievements of pioneering a major industry in Hong Kong and his contribution to cultural activities and community service, the University has resolved to confer upon him the degree of Doctor of Laws honoris causa.