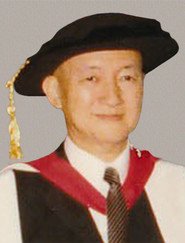 Professor King Sing Yui is also one of the University's own graduates, having received his BSc (Eng) degree in 1940. After a period of work in China he joined the University as a teacher in 1948 in the then Department of Engineering. In 1966 he was appointed Professor of Electrical Engineering and served as Dean of the Faculty from 1954 to 1957 and Pro-Vice-Chancellor from 1974 to 1977.

Apart from his work at the University Professor King was Chairman of the Hong Kong Joint Group of IEE, ICE and IMechE from 1963 to 1964 and President of the Hong Kong Engineering Society and the Hong Kong Institution of Engineers from 1958 to 1959 and from 1976 to 1977 respectively. He has served on many public bodies including the Hong Kong Telephone Advisory Committee, the Hong Kong Training Council and the Hong Kong Metrication Committee of which he is currently the Chairman. For his valuable contributions to the community he was appointed a Justice of the Peace (JP) in 1971 and was awarded the Order of the British Empire (OBE) in 1972.

In recognition of his life-long, devoted sevice to the University and his valuable contributions to the Engineering profession in Hong Kong, the University has resolved to confer upon him the degree of Doctor of Science honoris causa.