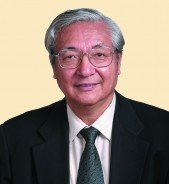 Professor Xu Zhihong is a world renowned botanist who has dedicated his illustrious working life to research into plant development and plant biotechnology focusing on the growth, development and genetic transformation of plants. He has also been a leading university administrator who has not flinched from expressing his stimulating and at times controversial ideas on education.

Professor Xu was born in Wuxi, Jiangsu Province in 1942. He spent his entire childhood in Wuxi completing his primary and secondary education at local schools. Xu was at junior secondary school that he developed a passionate interest in biology and horticulture. In particular, he recalls frequenting his teacher's office to use his microscope to study butterflies' wings. It was also at that time that he conducted his first seed sprouting tests.

His admission to study botany at Peking University was both exciting and difficult - the latter because it was the first time that he had left home to study in faraway Beijing.

After his graduation in 1965, Xu pursued further studies at the Shanghai Institute of Plant Physiology where he later took up employment. His research goal was to improve food production by regulating plant growth and development in China. As was required of him by the cultural revolution, he spent more than a year at an army farm and determined to use part of that time improving his English which he considered to be essential for furthering his research interests. Since few English texts were available to him, he ingeniously improvised by using the English edition of the works of Chairman Mao Tse Tung to accomplish his goal. He was clearly successful spending two years between 1979 and 1981 as a visiting scholar at the John Innes Institute in Norwich, which is the leading research centre for plant biotechnology in the UK, and the University of Nottingham. It was in the UK that he made significant discoveries to improve the biotechniques for the crops of barley and grain legumes.

Xu returned to China with the hope of putting his ideas into practice. Food modification is, of course, particularly important in China, where such a vast population must be properly fed. Finding new biotechnology methods of increasing crop production, improving its nutritional quality and rendering it disease resistant was, therefore, an important and integral step towards China's prosperity.

Professor Xu first conducted an in-depth study of plant cell regeneration in protoplast cultures. In particular he concentrated his work on maximising plant regeneration from protoplants in soybeans, peanuts, cowpeas and several woody species. The invaluable methods that he and other scholars developed paved the way for the genetic modification of these plants. This process, of course, involved the introduction of new genes of agronomic importance into plants in order to genetically manipulate and improve them. His laboratory at Peking University now focuses on molecular mechanism of sex determination of cucumber and the early development of microspore in rice.

In 1988 as a result of his important work he was named the "National Outstanding Young and Middle Aged Specialist". He was appointed director of the Shanghai Institute of Plant Physiology in 1991.

Professor Xu has notable Hong Kong connections. He was an Honorary Professor in the Department of Botany at this University from 1994 to 2000 and has also served the Hong Kong Government as a member of the Council of Advisers on Innovation and Technology.

In 1999 he assumed the office of President of Peking University, China's oldest national university, a post he held until 2008.

Holding a firm belief in the importance of effective communication between the university leadership, teachers and students, he notoriously introduced an electronic President's Bulletin Board and declared himself to be happy to have received more than two thousand messages mainly from the students in its first forty days of operation. The vision of Peking University was one of "Patriotism, Progression, Democracy and Science". Invited to comment on education he said:

He has shared with the world his views on several other important issues; his support for less bureaucracy in university administration, for less emphasis on university rankings and his concern with over-emphasis on examinations. On the other hand he has stressed the importance of students concentrating less on grades and more on building personal interests and capacity and developing a caring attitude towards society and nurturing a love for their chosen disciplines.

In recognition of his outstanding work he has received numerous honorary doctorates from distinguished universities around the globe including Nottingham, East Anglia and Edinburgh Universities in the United Kingdom, University College Dublin in Ireland, City University of Hong Kong, Waseda University in Japan, McGill and Montreal Universities in Canada and La Trobe and Melbourne Universities in Australia.

Having retired from university administration, he still continues his academic research work as a Professor at Peking University.

Reflecting on his illustrious career, it is clear that Professor Xu has excelled both as a research botanist and as an educator. His work on plant development and biotechnology of important food crops had benefitted not only China but also the world.

Mr Pro-Chancellor, it is my honour and privilege to present to you Professor Xu Zhihong for the award of Doctor of Science honoris causa.