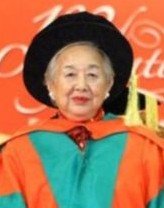 Dr Serena Yang Hsueh Chi is a shining example to us all that learning is a lifelong adventure. Although Chinese by ancestry, she grew up in Japan where her parents were engaged in business and became a fluent Japanese speaker. She was fortunate to be nurtured in a multicultural and multilingual environment and, having studied arts and literature at Kwansei Gakuin University in Japan, she graduated with a Bachelor of Arts degree in 1955.

Serena met her husband in Japan and returned to Hong Kong where the couple married in 1958. Whilst raising five children she continued to assist her husband in his very successful import business. But business was not her real passion. By reason of her multicultural upbringing Serena had long been interested in cultural differences and human nature and one day, on a golf course in 1993, chance took a firm grip on Serena's future life. Her much younger friend and opponent said that she was thinking of going to University to read psychology and suggested to Serena that she should do the same. Serena was sixty-two years of age and, probably to the great surprise of her friend, readily agreed to take up the challenge.

So she applied to join this University as a mature student. Chance again took centre stage and led to her fateful meeting with Professor Geoff Blowers, the Associate Dean of the Faculty of Social Sciences. They clearly established an affinity and, through mutual trust and respect, became not only collaborating colleagues but close friends. Immediately impressed by her passionate interest in psychology, Geoff suggested to Serena that, rather than sit the conversion examination to gain a formal qualification in psychology, she should immediately join the Department of Psychology as a visiting student and pursue her research interests. "What do you want of me?" she asked. Geoff, who had just discovered a possible link between a Japanese scholar Kosawa Heisaku and the famous psychoanalyst Sigmund Freud, replied "Research. Can you pursue the Heisaku-Freud link?" She readily accepted the challenge and the consequent collaboration between the trained psychologist and the keen, but unqualified, researcher who could fortuitously speak Japanese soon bore remarkable fruit. Serena flew to Japan and, in a manner that would have impressed Sherlock Holmes, pursued several leads, eventually tracing Heisaku's son. She returned to Hong Kong carrying a large bundle of papers, including hitherto private correspondence between Heisaku and Freud written in the 1930s. She also obtained a copy of Heisaku's private diaries. Serena and Geoff soon realised that they had discovered "pure gold" and this led to the joint publication of many articles on the subject and their work was presented internationally. Indeed a new chapter had been written in the global history of psychoanalysis.

Serena also proved a big hit with her fellow students for whom she provided a motherly figure and role model. She often dined with them in the student canteen and says that such frequent exchanges with them made her feel young in her heart.

As a consequence of Serena's deep affection for teachers and students alike, she decided to provide assistance to worthy research projects by way of the injection of generous funds. With inside knowledge as to where funds were most needed, she helped establish the Yang Hsueh Chi Staff Research Fund in 1996, to be used to conduct research into common perceptions of the handover in 1997, and the Yang Hsueh Chi Education Fund in 2003 for research in the Department of Psychology. Indeed, many disciplines, endeavours and projects at this University have benefited from Serena's support. These include student scholarships, the Oxford-HKU Psychology student exchange programme, distinguished lectures and Endowed Professorships. The Serena Yang Library and Prizes were established in honour of her contributions to the Department of Surgery.

Serena shares the University's view of the increasing significance of internationalisation and, in 2005, she helped to establish its first international student centre on campus, the Global Lounge, which provides a very popular and elegant meeting place for our many visiting students.

Currently Serena is an Honorary Senior Research Associate in the Department of Psychology. She was also one of the founding members of the HKU Foundation and remains one of its Honorary Patrons. In 2005 she was awarded an Honorary University Fellowship by this University.

Outside the University Serena is a Council Member of Caritas Hong Kong, an Honorary Governor of the Hong Kong Sinfonietta and holds an Honorary Doctorate from the Open University of Hong Kong.

She tells me that her other sustaining passion is classical music which has both soothed and encouraged her in times of stress and challenge. Serena is a remarkable person. Not content with a successful and satisfying life as mother and business woman, she decided that a quiet life of prosperous retirement was not for her. Our University has been very fortunate that she came to us to find an intellectual challenge unusually late in life. This challenge she overcame with vigour and aplomb. She is an inspiration to us all.

Mr Chancellor, it is my honour and privilege to present to you Dr Serena Yang Hsueh Chi for the degree of Doctor of Social Sciences honoris causa.