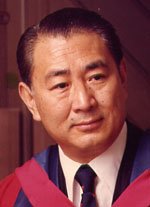 Mr Chancellor, I present to you Harry Fang Sin Yang, OBE, JP, for the award of the degree of Doctor of Laws. Fang Sin Yang was born in Northern China, in Nanking, though he had a family home in Anhui. He arrived to study in Hong Kong, attending King's College from 1936 to 1940. His memories of the Hong Kong of forty years ago are still vivid in his mind. They were years of hard work. He soon showed an early determination to equip himself with Cantonese, English, and to matriculate one year earlier than most. It was not an easy task and he had a formidable struggle to make his way. He began his studies in this University in 1940. Father Kelly at Ricci provided him with a place - (with Jesuitical aplomb) a pantry then converted into young Sin Yang's living quarters. From then he completed his first year and began the second year. The war however intervened. He had his share of incident. Had the Japanese snipers been more accurate in shooting the persons in his ambulance, he would have been killed at that point.

The story of his escape into China is a further clue as to his determination, and he eventually made his way into China and even spent a year as manager of a soya bean factory. He gladly associated himself with Professor Gordon King's "medical nursery"; so on to Chungking. As a testimony to his bravery he was awarded the Defence Medal in 1948. He returned to Hong Kong after the war and, following the scheme of allowing those studying in China to count their wartime studies, he was, at age of twenty six, a doctor at last.

His talents were quickly recognised here and from 1950 he took up a number of posts in this University including that of Lecturer in Orthopaedic Surgery. The Sino-British Fellowship which he earned in 1952, took him to Liverpool where he produced a dissertation on the cervical-spine. The method used involved studying all the records of convicted murderers who had been hanged at Liverpool, to discover what happened (in orthopaedic terms) at that final moment of despatch. The Merseyman, so he discovered, hangs just like everyone else. His subsequent publications in learned medical journals expanded the knowledge which he had acquired. Back in Hong Kong he resumed his medical education and quickly became a well-known figure in medical institutions such as St Paul's Hospital, Grantham Hospital, the Margaret Trench Medical Rehabilitation Centre, the Ruttonjee Sanatorium, and the Duchess of Kent Children's Orthopaedic Hospital of which he was Chairman of the Medical Advisory Committee. He soon found that his particular medical speciality took him into new areas of activity. Eventually, the way ahead was made clear. He came to question the facilities available for people who are 'handicapped' - a euphemism to describe a multitude of orthopaedic tragedies. So much prejudice existed.

A report on the handicapped recently produced in Britain throws some light on the problem there: it referred to "an unwilling but unchanging acquiescence in second-class citizenship arbitrarily imposed by an indifferent and patronizing public". Such an assessment, he would agree, is unfortunately applicable too, in Hong Kong.

Being a man of compassion as well as reflection, he found the social implications of his work coming to thrust themselves upon his consciousness. At the point when the scalpel can do no more, how can society help? He turned to the remedial side, to use that unlovely but poignant word, and to "rehabilitation". This became for Dr Fang his forte and the thrust of his life - a problem with both and intellectual dimensions. Mr Chancellor, we all have enough compassion, as La Rochefoucauld said, to bear the sufferings of others. Of some men, like Harry Fang, this is not true. His concern has taken him into all of Hong Kong's major social organizations, including the Tung Wah hospitals group, the Council of Social Service and the School Medical Service Board. At the same time he became professionally well-known, acquiring no fewer than six fellowships in surgery.

We turn now from special, to governmental activity and to the Legislative Council where from 1972 a new career awaited him, one in which his devotion could perhaps be more publicly manifested, at the apex of the government. Mr Chancellor, his continued advocacy in this most noble of all causes, rehabilitation, has made him, in the very best sense of the word, a one-man pressure group for the handicapped. The whole subject is now a matter of concern to the Hong Kong Government.

He has been active in the Finance Com-mittee of Legislative Council, and is on its Establishment Sub-committee. He has been a member of the Social Welfare Advisory and Planning Committees, the Chanty Clinics and on ad hoc committees on rehabilitation and vocational training for the physically and mentally handicapped. For twelve years he was a member of the Dental Council of Hong Kong.

As far as rehabilitation is concerned, his public service stands in a class on its own. He has attended conferences of experts on the subject from Portugal to Canada and has found himself at the centre of all the associations and societies in the region. He has been Chairman of the Hong Kong Society for Rehabilitation and has been President of the Hong Kong Medical Association, the Hong Kong branch of the British Medical Association and the Hong Kong Orthopaedic Association. His public service won him, in 1969, the OBE. His publications on his own subject of orthopaedic surgery have taken him all the way from a paper on Footbinding in Chinese Women (1960), for the Canadian Surgical Journal, to Treatment of Tuberculosis of the Cervico-Dorsal Spine (1966) for the Journal of the Royal College of Surgeons (Edinburgh).

Mr Chancellor, such an active life (and family life) might suggest no time for any relaxation. There is, however, perhaps one item which he will not mind the mention. If I speak of Elma, Lionel and Nicky, I speak of racehorses and Dr. Fang's modest interest in the turf. It was Bernard Shaw, no less, who saw a correspondence between the gentle love for horses and people who were "natural, wholesome and contented". Mr Chancellor, for his services to medical education in Hong Kong, as well as for his devoted compassion to the needs of the handicapped shown by a social worker par excellence, I ask you to confer on Fang Sin Yang the degree of Doctor of Laws honoris causa.