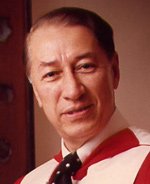 Mr Chancellor, the repute of this University's Medical Faculty stands high and the contribution of its alumni is universally recognised. Yet in Dr John Ho Hung Chiu we have produced one of our few graduates of quite outstanding merit. It is fitting that we should today add yet another distinction to the almost alarming number he already has acquired.

Son of a family long established in Hong Kong, a family moreover for which this University has reason to feel great gratitude, Ho Hung Chiu first passed through our portals as a science undergraduate in 1934. In the succeeding year he transferred to the Medical Faculty where he soon fell under the influence of Professor Digby who was the first to draw his attention to the local prevalence of naso-pharyngeal carcinoma and the paucity of knowledge then pertaining to it. His student days were full. Apart from his studies, for which he at once revealed aptitude and application, he was elected President of the Students' Union, was Sports Captain of the Athletic Association - he early discovered the loneliness of the long distance runner - and played both Laertes and Rosencrantz in Hamlet. And certainly to his own self he never was more true than in 1939 when Professor Robert Lim, at that juncture Head of the Red Cross attached to the Chinese Army, visited the University to appeal for volunteers. The response to Lim's call was immediate. Ho Hung Chiu became the treasurer of the appeal fund and it was then that he met his wife, Miss Florence Kwok, Arts undergraduate, the assistant treasurer. The appeal produced more than a marriage, however. It provided two ambulances and two complete surgically-equipped field units which were driven to Canton by John Ho and three others, and handed over to the Chinese Army Medical School just before that city was invaded by the enemy. Graduating in December 1940, Dr. Ho at once joined Professor Lim's Emergency Medical Relief Corps, at first tending the wounded and later forming part of a team providing rudimentary training in preventive medicine. The work was exceedingly arduous, but personal privations were submerged in the satisfaction of service to his suffering countrymen. Shortly after Dr. Ho's return to liberated Hong Kong he was placed in charge of the Lai Chi Kok Infectious Diseases Hospital. Here he did battle for the next nine months, his official foe epidemics. But his analytical approach to life and medicine had from the outset attracted him to research. Accordingly in 1946 he left for England to advance his studies, and it was in London that his interest in radiology was awakened. On his return to his birthplace, Dr. Ho, by now a Member of the Royal College of Physicians and a qualified radiodiagnostician, was appointed to head the Medical and Health Department Institute of Radiology. This branch of medical science was but poorly developed here both as to diagnostics and particularly as to therapeutics. By his own efforts in these fields he has built up the Institute which diagnostically services all Government institutions in Hong Kong and treats over ninety percent of the cases requiring radiation therapy in the Colony, not to mention patients from all over Southeast Asia. It is largely due to Ho Hung Chiu that it is recognised as one of the major radiotherapy institutions in the world, its renown reflecting his own.

Initially Dr Ho specialised in diagnostics, but increasingly therapeutics commanded his attention and he is one of the two men to have achieved acknowledged stature in these two distinct and separate branches of radiology. This expertise he has applied most notably to cancer. It was due to him that the Hong Kong Anti-Cancer Society, of which he has been Chairman since its foundation in 1963, was established. A fine hospital, which he administers with that same efficiency and dedication that he gives to the Institute, is probably the Society's most prominent achievement and, let us remark, a monument to the munificence of many. In both places Dr Ho has undeviatingly pursued his principal research, the causes and cure of cancer of the naso-pharynx. In his systematic study of this carcinoma he has left no avenue of enquiry unexplored, and all sources have been applied, immunological, virological, medico-historical, biochemical, epidemiological. He has emerged as the authority on naso-pharyngeal carcinoma and the foremost pioneer of the most effective therapeutic measures we yet know of this dire disease. His medical fame is global. He has published extensively and he is a familiar, to some a forbidding, figure at international conferences and congresses. It is further spread by the numerous radiologists he has so painstakingly trained, both doctors and ancillary staff, and by our own undergraduates, for he has been a part-time Lecturer in Radiology in the Faculty of Medicine for over two decades. His conference papers and his lectures alike are remarkable for their lucidity of exposition, coupled with a talent for conveying his own enthusiasm to his attentive, and often awed, audiences. He has indeed created a radiological empire whose throne none would dare attempt to usurp.

It is hardly surprising that a man held in such esteem should have received many honours. I will mention only three. In 1962 he was elected Fellow of the Royal College of Physicians and four years later was awarded the Officer of the Most Excellent Order of the British Empire (OBE). This very autumn he will become the first recipient of the Sir Patrick Manson Gold Medal. "The apparel oft proclaims the man", and so, Mr Chancellor, may I request you to ensure that John Ho Hung Chiu is properly garbed by conferring upon him the honorary degree of Doctor of Science honoris causa.