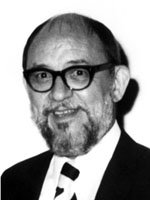 Mr. Chancellor, Blackpool is famous for its illuminations but surely few of its lights can have shone with such lustre as that of Bernard Mellor. His native town, the University of Oxford, wartime India and China have all, in divers ways, been the fortunate recipients of his endeavours. But it is as a man of letters and as the servant of this University that we do him honour here today.

His earliest intent was to be a concert pianist. Though no mean proficient, he was dissuaded from so perilous a course by his father. Instead he elected to read English at Merton College, Oxford. Here in the heady if anxious years from 1936 to 1940 - when Sebastian's teddy bear had been put to flight - Bunny Mellor flung himself into University life. Outside his College, his principal activity was as Editor of the Cherwell, in which he was assisted by contemporaries of note, not least his political columnist, a certain Edward Heath. However, it was within the stout walls of Merton that Mr. Mellor met the two men who were to exercise so profound an influence upon him: the one, the late Edmund Blunden, tutor and exemplar; the other, Yang Hsien-yi, a Chinese undergraduate somewhat at sea in an alien land. Yang was his first contact with China, and a decisive one. In 1940 he joined the Royal Artillery and evincing an interest in the culinary art was sent on an Army cook's course. This was to result in his first official publication, pithily entitled "Ration Cooking for Small Detachments". Both hotter fare and wider responsibilities befell him when he was commissioned in 1942 into the Third Madras Regiment, Indian Army. The sub-continent yet again aroused the creative in Bunny Mellor. Discovering that his regiment had no official uniform, he calmly proceeded to design his own, and resplendent in turban and myriad silver tassels astounded GHQ, Delhi. His work in the Indian Army was concerned with intelligence - the less charitable might suggest that Wireless Interception Training proved an admirable asset for a future Registrar - and armed with this new found expertise he was, in 1944, posted to the China theatre.

China, at last he had reached his goal, had attained his overriding objective since Oxford days. But it was a China long ravaged by war, a land fighting for its survival. As a Unit Commander of the Inter-Services Liaison Department, Mr. Mellor brought to bear those esoteric skills so lately acquired, and furnished with proverbial cloak and dagger did sterling service. He also was to forge many future friendships. Shortly after Liberation, he came to Hong Kong, acting as Assistant Director of Education in the Civil Affairs Administration. In the August of the following year, 1946, he was appointed a Lecturer in English and the Acting Registrar of a University many of whose buildings were open to the skies and whose very existence was open to doubt. Thus began an association which has continued to the present. A short spell at Oxford followed, to be broken when in January 1948 he was invited to return as Registrar. The length of his tenure of that onerous office is unrivalled and he has emerged as the senior amongst serving registrars in the Universities of the Commonwealth. His devotion has been remarkable, his contribution incalculable. Along with a small band of brothers, he nursed a University, sorely bruised and battered, back to health and vigour. Never hide-bound, never faint-hearted, he has encouraged new developments and urged on vital expansion. With dextrous aplomb he has threaded a path through the maze of conflicting interests, sometimes soothing the ruffled, occasionally checking the madcap, always prepared to give liberally from his rich store of experience. The two qualities which mark this Registrar are style and foresight.

We in this University are far from being the sole beneficiaries of Mr, Mellor's energies. The academic community of Hong Kong as a whole is heavy in his debt. Over the years he has served on innumerable committees concerned with education, both secondary and tertiary, and he can fairly claim to be one of the principal architects of our sister University. For these endeavours he was made Officer of the Order of the British Empire in 1966. In the wider world the problems of Universities in Australia, the Philippines, Malaysia, and Singapore, all have commanded his attention. The institutions of learning in North America came under his scrutiny when in 1957 and 1958 he was seconded to Washington and Ottawa as an adviser on matters of higher education. A veritable flood of official reports and major works in the field of comparative higher education then ensued, authoritative, urbane, and invaluable. Yet his pen has been widely employed on, perhaps, more verdant vellum. Here we have the man of affairs wedded to the man of letters. The poems of Sir Francis Hubert he has rescued from a wholly undeserved neglect in an edition at once scholarly and elegant. In close collaboration with Edmund Blunden he has delved deep into English poetry from the seventeenth century to the mid-nineteenth, culling delightful treasure. From his Italian retirement we may confidently expect publications on tobacco, on the English in Italy, and much more beside. Mr. Chancellor, although Bernard Mellor is to leave us next year, we may hope that this University, to which he has vouchsafed such unstinted loyalty, may not be entirely bereft of his counsel. In requesting you to confer upon him the honorary degree of Doctor of Letters we, like Mr. Mellor himself, look as much to the future as to the past.