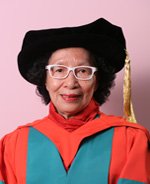 Ms Bow Sui May is a shining example of a person who has dedicated her life to helping others. She has played a pioneering and sustained leadership role in changing our perception of deaf children and in assisting and enhancing their education and future careers. She has done this both in Hong Kong and latterly in Mainland China.

Ms Bow's family moved to Hong Kong in 1947 when she was eleven years old. She completed her primary and secondary education at Ying Wah Girls' School where, she explains, she first experienced the caring spirit of Christian love shown by her missionary teachers. This love inspired and sustained her throughout her career.

Her first job in Hong Kong, for which she received the princely sum of $30 per month, was as a student teacher at the Hong Kong School for the Deaf, a wonderful school founded by the Anglican Church Missionary Society and the Hong Kong Sheng Kung Hui some twenty years before she joined. The School, whose premises were, and still are, situated in Diamond Hill, was the first and only school at the time for hearing-impaired children in Hong Kong. She continued teaching at the school for the next forty-four years, becoming its principal in 1968.

In her early days as a teacher, children who were poor and suffered hearing disabilities had no access to formal education and could only look forward to a life of manual labour. Indeed deafness was then considered shameful and thought to be imposed on a family as a 'curse' for the 'sins' of one's ancestors. As a result deaf children would often be hidden away from the community and would inevitably lead miserable, uneducated, lonely lives. Ms Bow strove to change this perception to create an ideal environment in which deaf children would be accepted into the community as every other child. She realised, however, that, to do so, she would have to take on the challenge of changing the culture in Hong Kong. She did so and her success was indeed great.

In 1959 the Chinese community in England generously donated the first hearing aids for ten pupils at the school after they learned of the need of the student Lee Man Sun who was the overall winner in the International Painting Competition for Deaf Children organised by the British Commonwealth Society for the Deaf.

The following year, strongly recommended by the school council, Ms Bow was awarded a Rotarian Scholarship to study a University Certificate Course for Teachers of the Deaf at the University of Manchester. After graduation she returned to Hong Kong determined to bring about her longed-for changes. One of her first achievements, ably assisted by Dr George Choa, was to raise large sums of money to supply hearing aids to most of the hearing-impaired children. Dr Choa also convinced the Rotary Club Island East to donate a new primary school building, the Victoria Park School, as a branch of the Hong Kong School for the Deaf. Ms LW Li was appointed its principal.

Following closely upon this success she then assisted the Special Education Unit of the Department of Education to run a two-year part-time training course for all teachers in the deaf schools in Hong Kong. At the same time her School began to train audiology technicians, speech teachers and social workers. Parent-teacher associations were formed and she organised parent groups to take care of deaf students at home, also publishing a newsletter for parents of deaf children to exchange experiences and encouraging them to ensure that their children received appropriate education. Despite the lack of funding, deaf children were enabled to integrate into mainstream society.

After years of frustrating attempts, she, at last, secured a major triumph when Government agreed that all special schools should receive official recognition together with proper funding.

Next, through a joint effort with the Council of Social Services, she successfully lobbied for a disability allowance for students with profound hearing impairment. The provision of this disability allowance was very significant as it encouraged parents with children with hearing disabilities to step forward and introduce their children into the community and into an educational environment. The shame attached to deafness was beginning to dissipate. Indeed, in the 1980s, under the new caring learning environment, for the first time a number of deaf students were able to gain admission to tertiary education.

Having studied for a Masters Degree in Deaf Education at Deakin University in Australia in 1976, Ms Bow returned to Hong Kong and was instrumental in promoting the establishment of a BSc course in Speech and Hearing Sciences in 1988 and a Masters Degree course in Audiology in 1996, both at our University. These courses have gained world-wide recognition.

A new school building for the deaf, funded from widely differing sources and with greatly enhanced facilities, was opened in Diamond Hill in 1991 by Lady Wilson. It serves as a lasting tribute to Ms Bow.

When she officially retired in 2000, she refused to retire. Instead she turned her devoted attentions and boundless energy to the Mainland. There she worked tirelessly to improve the lives of deaf children and enhance the standard of their care and education. With the co-operation of the late Mr Zhau Yong Ping, an officer serving in the Education, Science and Technology Department of the Liaison Office of the Central Government in Hong Kong, the late Mr Li Hong Tai, Chief Secretary of the Special Education Association for China, Miss Shen Qiao Zhu and the Department of Basic Education in China, nineteen Experimental Deaf Schools were established together with a Training Institute for special schools teachers, speech teachers and audiology technicians. She also introduced the concept of inclusive education into Mainland China and helped equip teachers in mainstream education to work with children with hearing impairment. Indeed she has remarkably provided training for more than 5,000 principals and teachers from over 700 schools for the deaf in Mainland China and enabled more than 100,000 deaf students to receive high quality education to enable them fully to develop their potential and contribute their talents to society in the same way as their fully hearing peers. Her assiduous efforts in improving deaf children's ability to communicate have transformed the focus of their education from one concentrating on training for manual work to a conventional education alongside their hearing peers.

How does one sum up a life such as this? A life of selfless service and dedication. A life of energy and determination to overcome barriers and prejudice. A life of love.

When I asked Ms Bow what motivated her to take up such challenges, she replied:

I think it was the inspiring influence of my missionary teachers and school classmates who shared their Christian love with me; the guidance and support of my school council chairman and supervisor Dr K E Barker, Miss Ho Kei Ying, the Deputy Principal and all my wonderful staff. I believe that I was born to fulfill a purpose in life to help those who needed me most. I was only able to accomplish my goals because, throughout my life, many Hong Kong, Taiwanese and Mainland professors, school administrators, principals, teachers, audiologists, speech therapists, social workers, doctors, government officers, parents, students, philanthropists and many others selflessly devoted their love, time and effort. Together, we made everyone hear and speak.

Mr Pro-Chancellor, Ms Bow has embraced the true missionary spirit and has succeeded remarkably in changing our culture and perception to deaf children so that, as equal citizens, they can fulfill their proper roles in our society.

Mr Pro-Chancellor, it is my honour and privilege to present to you Ms Bow Sui May for the award of Doctor of Social Sciences, honoris causa.