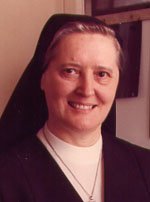 Mr Chancellor, I present to you Sister Mary Aquinas for the degree of Doctor of Social Sciences honoris causa. Sister Mary bears the name of one of the Catholic Church's most illustrious intellects - St Thomas Aquinas - who may be seen as one of the most remarkable intellectual synthesisers of all time. And yet, Mr Chancellor, one of the greatest problems faced by your Public Orator in preparing the citation of Sister Mary has been in the pronunciation of her birthplace, Ballinasloe (in Galway), a town in the western part of Ireland, some ninety miles from Dublin.

Sister Mary was one of a large family (the Monaghan family), many of whom still live in that town. She attended primary school and boarding school there and went thence to Dublin, to her first and more important, vocation, the call to serve God.

Her early inclination was in fact to marry the contemplative life to a scientific career. However the second vocation followed a somewhat different path and she therefore turned to the study of medicine. She qualified in 1947. Her most eager wish was to become a missionary in China where the two vocations could find their full flowering.

She arrived in Hong Kong in the traumatic year 1948. Within a few months the People's Republic of China was established and the newly qualified Sister could not follow her hope. China's loss, Mr Chancellor, was Hong Kong's gain, and perhaps recalls Proudon's comment regarding the "fecundity of the unexpected". Given the massive influx of refugees into Hong Kong at that time, a particular concern was health. Hong Kong's population in 1948 was then much less than half its present size. The influx of refugees could not but spell health problems, and from the beginning of 1949 to the spring of 1950, about 776,000 refugees crowded into the colony. The figures for 1949 for tuberculosis alone are startling - 2,611 deaths, a rate of fourteen per 10,000 persons.

Mr Chancellor, we come to the centrepiece of our citation and to the statement of Sister Mary's community concern. Sister Mary has devoted her life to the battle against chest diseases and most particularly, tuberculosis which, even two decades ago, was Hong Kong's largest single cause of death. Today, due in no small measure to the remarkable work of Sister Mary and her devoted colleagues, it has become eighth in the list of diseases causing death. She will tell you that tuberculosis was not a "fashionable" medical problem (as it were), but, of course, for centuries that disease known as "consumption" has been a fearsome prospect which has decimated populations. The achievements have been considerable. In 1976 there were 568 deaths from tuberculosis which is considerably smaller than it was even when Your Excellency assumed office. She has well depicted the scope of the problem and of her efforts to solve it, almost unconsciously perhaps, in her writings. The watershed came in the fifties with the drug regimen which spelt the end of the earlier 'unsophisticated' methods of fresh air and charitable cleanliness. The ability to kill the bacilli was now in our hands. So far, Mr Chancellor, I have told you of Sister Mary's community work; I now turn to something a little closer to home, and to the University itself. She has established herself as a notable local authority in the field of community medicine, since those early days when she was asked by the late Professor McFadzean to lecture on diseases of the chest. In 1953, as a World Health Organization Fellow, Sister Mary obtained further qualifications in this same area of chest medicine at the University of Wales, Cardiff. She became a Fellow of the American College of Chest Physicians in 1955, and in 1973 and 1977 respectively, took her membership and, subsequently, her fellowship of the Royal College of Physicians at Edinburgh. Mr Chancellor, Sister Mary has been a Council Member of a considerable number of Hong Kong medical boards, bodies and authorities. These include the Hong Kong Medical Development Advisory Council, the Hong Kong Medical Association, the Federation of Medical Societies of Hong Kong, the Pharmacy and Poisons Board, the British Medical Association (Hong Kong Branch) and the Society of Community Medicine of which she was Chairman in 1976.

She has been a Regent of the American College of Chest Physicians and a Council member of the Pharmaceutical Industry's Drug Abuse Sub-Committee. Finally, she has a particular reason to be here for she has for many years enjoyed the status of a member of this University's Board of the Faculty of Medicine.

Mr Chancellor, Sister Mary will not mind my describing her as lady of complex parts. She is an Irish Nightingale who operates (in both senses of the word) in a Parsi hospital in a Chinese setting in a British colony. She sees herself as a "private" in her own modest way, as a cog in a very worthwhile machine. To us here today, her rank is "doctor", for if she is a private, it is in an army of reverse hierarchy. Mr Chancellor, for her compassionate enthusiasm, for her religio medici and for her observance of the true principles of the Hippocratic Oath and for her services to the treatment of a debilitating disease for more than a quarter of a century, I call upon you to confer upon Sister Mary Aquinas the degree of Doctor of Socical Sciences honoris causa.