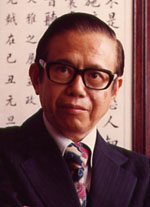 Mr Chancellor, I have pleasure in presenting to you Peter Lee Chung Yin, JP, for the degree of Doctor of Laws honoris causa.

Those of us who work most of the time in the classroom, at the coal face as it were, are not always aware that there is, to change the metaphor somewhat, another frontline. This is the university's public face. There is a need to remind the public that universities exist to serve them, to explain to the public the relevance to them of the development and dissemination of knowledge. Today we honour Dr Lee as a University man who has given unsparingly of his time and effort to make our cause known to a wider world. He is an astute and bonny fighter.

Mr Chancellor, some university men who have not profited from the experience, leave its portals believing, in the words of one incorrigible cynic, that "Life at a university is a bad training for the real world, and only men of very strong character surmount this handicap". Men of ideas are sometimes suspect; a professor, said W H Auden, is someone who talks in somebody else's sleep.

Dr Lee comes in that category of outside-insiders who knows the worth of the University, not only as a training ground for the young, but also as a continuing focus of excellence in any civilization or culture.

Peter C Y Lee was educated at St Joseph's College, Hong Kong, and was making his future plans when the Japanese invasion shattered the city. Education virtually came to an end. What he recalls about 1941 was an immediate reaction: whether the war would mean the end of examinations. He may well have agreed at that moment in time with Oscar Wilde who once cast doubt on examinations : "if a man is a gentleman he knows quite enough, and if he is not a gentleman whatever he knows is bad for him". Yet Hong Kong itself was undergoing the severest examination. The outbreak of war in 1941 naturally ended all formal learning as it did for a while the University itself. Indeed the University was systematically physically torn apart in the frantic search for wood. Precious equipment was shattered and strewn everywhere, as Peter Lee well recalls.

To tell the story of his bravery during the war would be to tell a story which itself would keep us enthralled. Not yet twenty, he saw at first hand the ravages of war both in Hong Kong (as a youthful air raid warden) and shortly afterwards in China itself.

He was immensely impressed with military camaraderie and saw at first hand the soldiers' continual and close encounters with death.

Thirty-one years ago, in October 1946, the University had nothing but the barest hopes. However, it opened very circumspectly with 100 students or so and Peter Lee was amongst those (now back in Hong Kong) who took his place in the Faculty of Medicine. This time examinations proved to be his salvation, and he took a grade "A" pass in Chemistry with such distinction that he entered directly into the Medical Faculty. He had been absent on active service for five years, far from the world of books and bunsens.

Within a short time he began to make a system out of the shattered student life. He organized the student society (the precursor of the Students' Union) and persuaded others to combine and cooperate for the revival of student involvement in their University. His strong independent spirit manifested itself, moreover, and he made himself self-sufficient to work his own way through his studies. Such was the chemistry of the man himself that independence of mind was always a primary element. Once again in his final year the prospect of examinations - qualifying examinations - loomed large as his resources were put again to the test. Professor Alec McFadzean presented him with a challenging diagnosis and asked for an answer. It became a dilemma: would he declare a man undoubtedly in his view very sick to be suffering from no more than a minor ailment? Dr Lee would not budge in his diagnosis that the man was sick. He had passed the examination (so he later discovered). More important he had passed a character test of the highest order. Mr Chancellor, although a successful doctor had emerged, per ardua ad astra, he did not forsake the University and in 1959 he became Clerk of Convocation, which post he held until 1964. Convocation is an important body; it represents the voice of scholars who have passed through our hands. Convocation members are still bound to their Alma Mater in ties of deepest sentiment. Dr Lee's special privilege is to have served no fewer than three times as Chairman (1968, 1971 and 1974 elections). As Chairman, Mr Chancellor, he has been on many occasions the spokesman for the University in a characteristically courageous way. A gentleman as publicly well regarded as Dr Lee has been all the more accepted, welcomed and understood. For a decade he has given of himself, standing in the forefront of the University's public persona.

Mr Chancellor, only a very few will know that Peter Lee's talents were recognised by the poet and former professor at this University, Edmund Blunden, who dedicated a sonnet to our graduand in 1960. The sonnet speaks of Dr Lee as:

Peter, whose public spirit all men know, and still whose good deeds oft escape our eye Veiled by your modest manner, "passing by, I just called in quiet and brief although devising, drafting, doing so much - and so you smoothed our path among the rest - we try to offend you with good will. O do not sigh so deeply. Six more lines, that's all, you know. Musical medical man! Observer hold of human ailments, conqueror of the same from masqueritis to the common cold, may fortune bring you more than merely fame; dear giver, may you gather tons of gold...For which in due course, you'll receive the Masquers' claim".

As for his public work we have not been unaware of this at Hong Kong University. So many areas have claimed his attention from matters medical to matters civic and from television to public relations. He is chairman of the society of occupational medicine, honorary Medical Director and Acting Chairman of the Hong Kong Cheshire Home. He has been an executive officer on Hong Kong's most significant medical bodies and has been the past President of the Hong Kong Medical Association over the major part of the decade. He has also been an active worker in the affairs of the Civic Association. His bonny impish pugnacity has everywhere been in evidence. We salute his courage, industry, public service and single-minded devotion to this our University, and in this spirit, I call upon you Mr. Chancellor, to confer upon Peter C Y Lee, the degree of Doctor of Laws honoris causa.