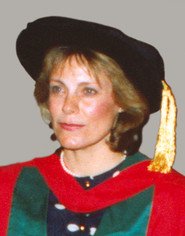 Having determined at the early age of five that she wanted to become a missionary Jacqueline Pullinger grew up to spend her adult life helping drug addicts, young delinquents and prostitutes in Hong Kong.

After graduating from the Royal College of Music, Ms. Pullinger’s first job was teaching music in the UK. She never, however, abandoned her dream of mission teaching, and it was in 1965 that she first felt the urge to pursue her chosen path in Hong Kong. She failed in her efforts to obtain employment with the Government as a professional musician, or with the missions, her youth (she was then 22 years old), counting against her. But, lack of prospects notwithstanding, she still set out for Hong Kong in 1966; and was almost refused landing rights because she had a one-way ticket only and no money.

She joined a kindergarten in the Kowloon Walled City to teach music and soon met her first drug addicts before starting the Walled City Youth Club. Ms. Pullinger challenged triad control of the areas of the Walled City and first exercised her gift of healing on a “chopped” triad member. He club was destroyed in retaliation but reopened immediately. She went on to establish in the neighbourhood of the Walled City four such aid centres, which formed in 1974 the nucleus of St. Stephens Society – or S.O.S.

The Society, inspired by Ms. Pullinger, has in the past 16 years also organized detoxification and rehabilitation centres in other parts of Hong Kong and in 1985 took over from the Government the former Hang Fook resettlement area to replace some of its smaller welfare establishments. Ms. Pullinger was awarded the M.B.E. in the Queen’s Birthday Honours List in 1988 for her major contribution to the public welfare.

The honorary degree of Doctor of Social Sciences in conferred on Ms. Pullinger in recognition of her services to the community.