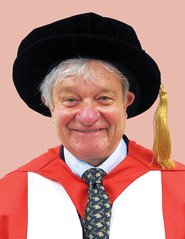 Sir Paul Maxime Nurse is living testament to the idea that curiosity, passion, and determination can lead to monumental breakthroughs and heralded scientific revelations. Sir Paul Nurse is one of the world’s foremost scientists whose discovery of the protein molecules that control the division of cells within the “cell cycle” revolutionised our understanding of cell biology and thereafter genetics. His research on the most fundamental unit of life, cells—their growth and development moreover, underpins so much promising medical, genetic, and agricultural research today. Importantly, Sir Paul Nurse is also a humanist. He is the rare scientific scholar who understands that articulate and impassioned academics possess not just the ability to influence public discourse and policy, but that they also have an obligation to do so. Here, he has led by example: challenging politicians who have advanced irrational, anti-science policies or those who have embraced, what he refers to as “bunkum science.”

When and where did Sir Paul Nurse’s curiosity-inspired breakthroughs begin? Very early in his life. Born into a working-class family in England, some of Paul’s most vivid memories of childhood revolve around his long walks to and from school. On these journeys, Paul carefully observed insects, plants, and animals and noted how they changed over the seasons—once asking himself why leaves which grew in the shade were larger than those exposed to significant sunlight. In the evenings, Paul’s attention turned toward the sky and he made notes about the movement of planets and the satellite, Sputnik-2, as it orbited the earth beginning in November 1957. The natural world piqued his curiosity and inspired him to learn.

So too did his teachers, who Paul described as impassioned and successful in making the world “seem such an interesting place.” One secondary school teacher in particular, Keith Neal, encouraged Paul and his fellow students not just to study natural history, but to investigate it and to conduct experiments in it: experiential learning at its best. Though his examination results enabled Paul Nurse to enter university, his post-secondary academic career was almost derailed before it began. Why? Paul did not possess a required foreign language qualification that was necessary for university entry at that time in the UK.

The future Nobel Laurette did not let this setback curtail his interest in science or curb his enthusiasm to pursue it. Rather, it propelled him into what I imagine was a dream job of every lad growing up in 1960s England: he worked for the Guinness Brewing Company. The noble pursuit of brewing beer and tasting stout, however, were not part of his official duties. Rather, he was employed as a lab technician where his curiosity and passions were matched by his abilities. Paul was able to complete his required tasks in such a short amount of time that he was also allowed to carry out his own experiments with yeasts once his official tasks were completed.

Unfortunately for Guinness, wiser, more rational heads prevailed within English higher education. After an extended interview, Paul Nurse was allowed to matriculate at the University of Birmingham where he began his formal studies in developmental biology. He has never looked back, nor has he ever stopped learning. Paul’s never-ending curiosity with how cells underwent differentiation led him to undertake a PhD at the University of East Anglia followed by an instrumental six years of post-doctoral work with Murdoch Mitchison at the University of Edinburgh. It was during this period that Dr. Paul Nurse identified the cdc2 gene in fission yeast and its importance in controlling the progression of the cell cycle from G1 phase to S phase and also the transition from G2 phase to mitosis. In essence, Sir Paul Nurse discovered the “master switch” which regulated the precise timing of cell cycle events, most importantly division. Just over a decade later, he identified, cloned and sequenced the equivalent gene in humans (cdk1).

What does all of this mean? Put simply, Sir Paul Nurse’s discoveries have revolutionised our understanding of cell biology, evolution, and genetics. His work, and work of others that followed—building on his discoveries—underpin so much promising research carried into potential treatments for cancer and other serious genetic diseases. Indeed, knowing how, when, and why normal cells, as well as cancer cells, multiply, is fundamentally important to discovering a cure for this malady of humanity.

His research achievements and curiosity have led Sir Paul Nurse to many different positions of responsibility and esteem. He has held prestigious posts including Director General of the Imperial Cancer Research Fund, Chief Executive of Cancer Research, UK, Chair of the Department of Microbiology at the University of Oxford, President of Rockefeller University, Inaugural Director and Chief Executive of the Francis Crick Institute, President of the Royal Society, and Chancellor of the University of Bristol.

The awards and honours that Sir Paul Nurse has secured for his discoveries are even more impressive. A few highlights include: membership in the European Molecular Biology Organization in 1987; elected a fellow of the Royal Society in 1989; appointed as a Founding Member of the Academy of Medical Sciences in 1998; awarded a Royal Society Royal Medal in 1995; awarded the Albert Lasker Award for Basic Medical Research in 1998; awarded the Royal Society Copley Medal in 2005; elected as a Foreign Honorary Member of the American Academy of Arts and Sciences in 2006; appointed as an Honorary Fellow of the Royal Academy of Engineering in 2012; awarded the Albert Einstein World Award of Science in 2013; elected as a foreign academician of the Chinese Academy of Sciences in 2015; awarded the 10th Annual Henry G. Friesen International Prize for Health Research in 2015; and appointed as an Honorary Fellow of the British Academy in 2016. On top of these awards, Sir Paul Nurse has also received more than sixty Honorary Degrees and fellowships.

In 1999, Her Majesty Queen Elizabeth II, knighted Sir Paul Nurse for his contributions to cancer research and his pioneering work on the cell cycle. Two years later, in 2001, the Nobel Prize Committee awarded Sir Paul Nurse, Leland Hartwell, and Timothy Hunt the Nobel Prize in Physiology or Medicine for their discoveries at the molecular level of the cell cycle. In 2003 Sir Paul Nurse received the French Legion d’honneur and in 2018 he was awarded the Order of the Rising Sun from Japan.

Despite all of these awards recognising his scholarly achievements and scientific discoveries, Sir Paul Maxime Nurse reminds those around him of the importance of humility. When I asked Sir Paul Nurse how he would like to be remembered 100 years from now, he replied, “as someone who contributed something of interest to the world, even if small” – a modest answer from someone who has done something so important for so many. When asked to comment on the greatest challenge he faced in life, he replied that it was coming from a working-class background and working his way through the education system. But, he quickly pointed out, this experience taught him an important lesson: namely “to follow the beat of your own drum” and of “the importance of making your own way in life, and not to rely on the privileges of birth and wealth.”

When I asked Sir Paul Nurse what he would do and where he would go if he could make himself invisible for a day, he informed me that he would gravitate to the center of Stonehenge “now banned to visitors, to contemplate the wonder of what humankind has achieved.” For a person who has helped unmask many secrets related to the most basic building blocks of all living things in our universe—the cell—Sir Paul Maxime Nurse has never lost sight of the big picture, be it humanity, our accomplishments, or the wonders of the natural world which we inhabit. He is an inspirational figure who reminds us to follow our passions, confront our challenges with spirit and ingenuity, and to always remain curious. Today he receives the University of Hong Kong’s highest honour.

Mr. Pro-Chancellor, it is my great honour and privilege to present to you, Sir Paul Maxime Nurse, for the award of Doctor of Science honoris causa.