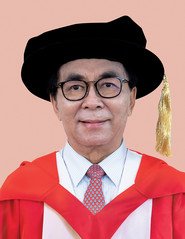 Professor Bai Chunli is a renowned scientist, administrator, and scholar who has devoted a significant part of his career to positions of political and academic leadership within the People’s Republic of China. First as Vice President, from 1996 to 2011, and then as President, from 2011 to 2020. Professor Bai led the Chinese Academy of Sciences—one of the most influential global academies of science in the world with over 60,000 researchers and 104 institutes. He has also served as the President of the World Academy of Science for the advancement of science in the developing world (TWAS) and remains honorary president of the University of Chinese Academy of Sciences (UCAS) and the University of Science and Technology of China (USTC).

Born in Liaoning Province in 1953, Bai Chunli graduated from the Department of Chemistry at Peking University in 1978. Thereafter, he received his PhD from the Chinese Academy of Sciences Institute of Chemistry in 1985. He then gained invaluable international experience when he carried out post-doctoral research at the California Institute of Technology in Pasadena, California. His next academic journey took him to Sendai, Japan, where he served as a visiting professor at Tohoku University between 1991 and 1992. Throughout his career, whether as a young, up-and-coming researcher or now as a distinguished scholar and policy maker, Professor Bai Chunli has benefited from, and advocated on behalf of, international exchange and collaboration.

As a scientist and policy maker, Professor Bai Chunli remains instrumental in advancing nanoscience and nanotechnology research. Within China, Professor Bai serves as the Chief Scientist for the National Nanotechnology Steering and Coordinating Committee, Vice Chairman of the Academic Degrees Committee of the State Council, and Vice Chairman of the National Committee for Science and Technology Awards. Internationally, Professor Bai is the Editor-in-Chief of the National Science Review and the journal Nanoscale, while also serving as co-editor or editorial board member on many important international academic journals in the field of chemistry and nanotechnology.

As a leader of the Chinese Academy of Sciences since the mid 1990s, Professor Bai Chunli has championed overseas partnerships that have benefited scientists, research institutions, and universities in China and around the world. Indeed, he has been a grand facilitator of global collaboration and scientific exchange from which the University of Hong Kong as benefited enormously. We have established five Chinese Academy of Sciences joint laboratories in chemical synthesis, materials, geodynamics, regenerative medicine and biomaterials, and one associated with big climate data is currently being considered. The University of Hong Kong is fortunate to have twelve Chinese Academy of Sciences academicians working in our university at present; the largest number in all Hong Kong universities. Professor Bai has helped make these initiatives not only possible, but successful and for that, the University of Hong Kong is extremely grateful.

Professor Bai Chunli is a distinguished scientist and devoted academic leader who has advanced China’s scientific community in innumerable ways: through scientific discoveries, with administrative and political leadership, and by facilitating countless international exchanges. Professor Bai Chunli has been awarded honorary doctorates or named fellowships at several universities in North America, Europe, Australia, and in East Asia. Today, he receives the University of Hong Kong’s highest honour.

Mr. President, it is my great honour and privilege to present to you, Professor Bai Chunli, for the award of Doctor of Science, honoris causa.