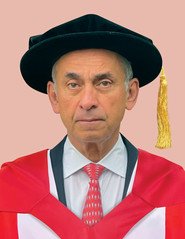 Professor the Lord Ara Darzi of Denham is the rare individual who has dedicated much of his adult life to a noble pursuit: the betterment of others. As a world-renowned surgeon, inspiring teacher, prolific researcher, health care reform advocate, and respected politician, Lord Darzi has made invaluable contributions to the welfare of countless individuals. Throughout his distinguished careers, Lord Darzi has likewise emphasised the importance of adopting patient-centered approaches to health care delivery and championed the expansion of minimally invasive surgical practices to radically improve efficacy, safety, and patient recovery time. Moreover, Lord Darzi has worked tirelessly to highlight and address health and health-care inequalities that arise because of socio-economic factors, both within the United Kingdom as Parliamentary Undersecretary of State for the Department of Health, and beyond as the country’s first Global Ambassador for Health and Life Sciences.

The humanistic outlook and approach that Lord Darzi has brought to politics, surgery, medicine, and education spring from his childhood upbringing and, no doubt, from his family’s own harrowing past. Ara Darzi was born in Baghdad, Iraq, to Armenian parents in 1960. Ara Darzi’s great grandmother and grandmother were the only members of his family who survived the Armenian Genocide of 1915-16, fleeing the city of Erzurum in present day Turkey on foot to settle in the northern Iraqi town of Mosul. At the age of five, Ara Darzi suffered a life-threatening case of meningococcal meningitis and relayed how his experience of being in hospital for more than one month, receiving daily IV-drips, ignited his curiosity and later drove his passion to study medicine. Coming from an engineering family, Lord Darzi relayed that his father may well have been somewhat disappointed with this career trajectory, at least initially, but eventually accepted his son’s vocational rebelliousness.

Ara Darzi’s pursuit of medical studies took him to Ireland, where he enrolled in the Royal College of Surgeons in Ireland (RCSI) in the late 1970s. He graduated from RCSI in 1984 and thereafter earned the postgraduate degree of MD at Trinity College, Dublin, in 1990. He joined Imperial College London in 1994, was promoted to professor in 1996, and just two years later in 1998 became the Paul Hamlyn Chair of Surgery and Head of Department. From early in his career as a surgeon, Professor Darzi pioneered minimally invasive, key-hole surgery within the United Kingdom and was one of the first individuals to master the now famous Da Vinci robot for surgery. He and the research teams he has led gained international acclaim not just for advances made in robotics, but also medical image computing, surgical guidance and navigation, and the development of body sensing networks to monitor postoperative recovery of patients. As an academic as well as practicing surgeon, Lord Darzi likewise invested considerable time and effort to improve surgical techniques and the surgical competence of students and fellow surgeons through the creation of virtual reality systems and virtual operating theatres. The impact and innovation of his work can also be easily measured by the fact that Lord Darzi has published more than 800 articles and edited, co-authored, and authored numerous books on surgery and healthcare.

Recognition of his distinguished achievements as a pioneering surgeon, researcher, and teacher followed quickly after becoming the Paul Hamlyn Chair of Surgery at Imperial College, London—a position he retains today. In 2001 he received the Queen’s Anniversary Prize for Excellence in Higher Education. One year later, in 2002, Her Majesty Queen Elizabeth II, knighted Professor Ara Darzi for his contribution to surgery and medicine. In 2004 Sir Ara Darzi received the Sheikh Hamdan bin Rashid Al Maktoum Award for Medical Research Excellence and three years later, the Rector of Imperial College, Sir Richard Sykes, described Lord Darzi as “a master of his surgical craft” a “dedicated university teacher” and “inspiring leader.”

Sir Richard Sykes made these comments as Sir Ara Darzi was about to embark on the next stage of his career—as a politician. In the summer of 2007, Prime Minister Gordon Brown appointed Sir Ara Darzi as Parliamentary Undersecretary for the Department of Health in his “all talents” cabinet, and subsequently admitted him to the House of Lords. From this position, Lord Darzi was tasked with spearheading a “clinically-led and evidence-based review” and subsequent reform of one of the United Kingdom’s largest and most consequential institutions: the National Health Service (NHS). The review, entitled “High Quality Care for All” was heralded by the Financial Times as “the world’s most ambitious attempt to raise the quality and effectiveness of the entire nation’s healthcare,” while the medical journal Lancet described it as advocating a “cultural shift . . . away from the political command and control of processes and towards professional responsibility for clinical outcomes.”

Leaving cabinet in July 2009, Lord Darzi returned to academic and clinical pursuits but would soon find himself again juggling the demands of politics and public policy, along with surgery and education. Indeed, soon after being appointed Chair of the Institute for Global Health Innovation at Imperial College, Lord Darzi was asked by the new Prime Minister, David Cameron, to serve as the UK Global Ambassador for Health and Life Sciences in 2010. The Mayor of London and future Prime Minister, Boris Johnson, likewise called on Lord Darzi to direct a review of London’s health and wellbeing services. Here, Lord Darzi not only raised awareness about the growing problem of youth obesity in London, but advocated policies and programs to combat it. For his contributions to surgery and public health, Lord Darzi was elected a Fellow of the Royal Society in 2013.

I began my oration describing Lord Ara Darzi as a respected politician—an adjective one rarely, if ever, hears in relation to any politician anywhere in the world. Lord Ara Darzi is the exception. Indeed, the fact that he has been called into higher service by the leaders of both major political parties in the United Kingdom illustrates just how valued Lord Darzi’s opinions are, and his effectiveness as a messenger and as a leader. Lord Ara Darzi is also a leader of great conviction and unyielding principle: he resigned as a Labor peer in July 2019 citing alleged tolerance of antisemitism by the then leadership of the UK Labor Party.

Lord Ara Darzi’s dedicated political and medical service, moreover, has spanned the globe. He has helped run training courses for doctors and surgeons in Armenia, where he was awarded the Order of Honour in 2017 by its president. He has advised the government of Qatar on their health system; work which was recognised by the Emir Sheikh Tamim Bin Hamad Al Thani with the Qatari Sash of Independence in 2014. In recognition of his contribution to global health and the development of medicine in Japan, Lord Darzi was awarded the Order of the Rising Sun, Gold Rays with Neck Ribbon in 2019. Lord Darzi remains active in many non-governmental organisations that champion medical care and humanitarian assistance to all parts of the world. Most recently, in late 2020 he was appointed the President of the British Science Association, a position from which he hopes to illustrate the important role that science can, must, play in everyday life.

Professor the Lord Ara Darzi of Denham embodies the best traits of an exemplary global citizen driven to assist others. He is a distinguished surgeon and health care advocate whose achievements transcend research and teaching, surgery and medicine, to encompass politics, and of course, international humanitarianism. Today he receives the University of Hong Kong’s highest honour.

Mr. Pro-Chancellor, it is my great honour and privilege to present to you, Professor, the Lord Ara Darzi of Denham, for the award of Doctor of Science, honoris causa.