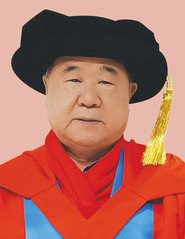 Professor Guan Moye, known to the world through his pen name, Mo Yan, is not only China’s most renowned contemporary writer, but he is also one of the world’s most gifted story tellers. Through his pen, Professor Mo Yan guides readers along magical journeys which penetrate beneath the surface of everyday life. He allows people to see in themselves a sense of fatalism—great suffering, albeit mingled with small happiness—entrenched in both bright and murky aspects of human existence. Throughout his works, Mo Yan artfully interweaves history, reality, and literary imagination and produces expressive words, graphic episodes, and mythical plots. In doing so, he reveals penetrating insights into the fundamental emotions of human beings through extraordinary narratives that transcend time and space, nations and cultures. In short, Mo Yan possesses that rare ability to seduce readers with words and imagery. In 2012, Professor Mo Yan was awarded the world’s most distinguished prize for literary creation: the Nobel Prize in Literature.

Born in Shandong Provence in 1955, Mo Yan grew up in a rural setting, a fact that should not surprise anyone familiar with his work. Often, his stories are deeply connected to the cultural as well as geographic landscapes of China. Mo informed me that his passion for writing began as a youngster, through the simple art of listening. Growing up, Mo heard stories told at village fairs and relayed how this experience inspired him to share what he had heard with others. When Mo began to read books, his passion to communicate expanded to encompass the written word. Mo’s early education, however, was upended at 11 when he was forced to leave school and to work as an agriculturalist at the beginning of China’s Cultural Revolution. Though he faced numerous hardships, he never lost his passion for story-telling.

Professor Mo Yan began to write, and to be recognised as a writer, in a place that many people may find surprising: The People’s Liberation Army. At the age of 21, Mo successfully enlisted in the PLA and would eventually gain entrance into the People’s Liberation Army Arts College in 1984. That year marked the publication of his first novella, A Transparent Radish. Two years later, he gained widespread acclaim for his earliest masterpiece, Red Sorghum. In this novel, as with his later works including The Garlic Ballads (1988), The Republic of Wine (1993), Big Breasts and Wide Hips (1995), Sandalwood Death (2001), Life and Death are Wearing Me Out (2006), and Frog (2009) to name just a few, Professor Mo Yan crafted beautifully narrated stories of considerable emotional depth that reveal the best and worst of humanity. His works are treasures of modern world literature.

Professor Mo Yan has been the recipient of numerous national and international awards, beyond his Nobel Prize in Literature. He has received the Ordre de Arts et des Lettres of France, Italy’s Nonino Prize, the Fukuoka Asian Culture Prize and the Kiriyama Prize of Japan, the Newman Prize for Chinese Literature, the Mao Dun Literature Prize, Korea’s Manhae Literary Prize, and the Algerian National Order of Merit Medal. Mo serves as a Fellow of the Bavarian Academy of Fine Arts and as an Honorary Member of the Modern Language Association of America. He has received honorary degrees from universities in North America, South America, Europe, and Asia.

Amid all of his acclaim and successes, Professor Mo Yan has never lost sight of his upbringing, his family, or his roots in the Shandong Peninsula. Moreover, he is aware of the important impact that each has had on his life and career. From his grandfather who was a reputed carpenter, Mo informed me that he learned the importance of diligence, craftsmanship, and expertise. His father imbued him with a great love of culture, especially calligraphy, and through his mother he learned the important human emotion of sympathy. “In my novels,” Professor Mo Yan informed me, “one can find traces of all members of my family.” Without these people, he assured me, he could never have accomplished what he has to this day. Professor Mo’s humility, however, is perhaps best showcased by how he answered my question: How do you most want to be remembered 100 years from now? With utmost sincerity he replied: “I hope they forget my name, but that they remember the figures in my works.”

Professor Mo Yan, I feel confident in stating that people will remember you, as well as all that you have contributed to world literature, well beyond the next century. Today, we recognise you for your contributions with the University of Hong Kong’s highest honour.

Mr. President, it is my great honour and privilege to present to you Professor Mo Yan, for the award of Doctor of Letters honoris causa.