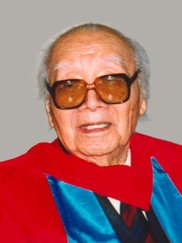 Professor Liu was born in 1896 in China, in Jiangsu Province. He has achieved international status as one of the founders of modern Chinese art education, and he is recognized as a leader in the field of Chinese art.

As a young man in China he was exposed to teachings within his family on democracy which influenced his adoption of a nationalistic and anti-feudal ideology. His mother died when he was 14 and he went to Shanghai to broaden his horizons and with a determination to learn about Western painting. He later founded there the first art institution of modern China – which later became the Shanghai Art Academy.

The introduction by Professor Liu of the use of human models in art classes in the Twenties shocked many of the more traditional members of the Chinese society who vilified him and gave him the name “Rebel of Art”. The ensuing ten-year controversy over his defence of a scientific approach to art education led to his arrest and the closure of his academy but, with changing public opinion, his struggle in the end triumphed. In 1953 Professor Liu became President and Professor at the Nanjing Art Academy. For over half a century he has visited and delivered lectures and held exhibitions in Japan and many European countries. He has also spent a life-time in creative work on drawing, painting, calligraphy and on the study of the theory of art. Whilst his paintings were influenced by the Impressionists, his later work has also been influenced by Oriental art. The art critic Laurence Binyon has written that Professor Liu’s skill and achievements are equal to those of any contemporary Western master.

The honorary degree of Doctor of Letters is conferred on Professor Liu Hai Su in recognition of his achievements in painting and art education.