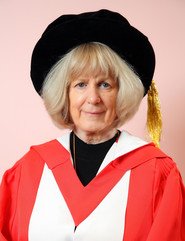 Dr Mary-Claire King is a quite remarkable person. Indeed a very brave woman who ventured fearlessly into uncharted territory where, at the time, many people feared to tread. She is a geneticist who has demonstrated deep commitment to human rights issues.

Mary-Claire King was born in Chicago in 1946 and, from an early age, developed an interest in solving mysteries and mathematical puzzles. At the age of fifteen she lost her best friend to cancer, an event that had a significant influence on her later choice of career. After graduating from Carleton College in Minnesota with a degree in mathematics, she switched to studying genetics for her doctorate at the University of California at Berkeley. The conclusion of her thesis took the world by surprise as she proved that humans and chimpanzees were, genetically speaking, 99% the same.

Having secured a post at the University of California, San Francisco, she turned her attention to seeking the causes of cancer. At the time the dominant theory was that cancer was viral but Mary-Claire had a hunch that inheritance and genetics had to have some relevance to its incidence. Conducting research into the question whether breast cancer clustered in families to an extent greater than chance, she discovered that the answer lay in the affirmative. Whilst it seems obvious now that genes can be tied to cancer, at the time the idea was radical. Having moved to the faculty at Berkeley as Professor of Genetics and Epidemiology in 1976, she demonstrated in 1990 that a single gene, that she later named BRCA1, was responsible for many breast and ovarian cancers and that breast cancer in some families might be hereditary. This was revolutionary because, at the time, most scientists believed that genes could not be responsible for common complex diseases such as cancer. It was even more impressive because work had not yet begun on the Human Genome Project. This discovery led to a race in public and private laboratories to clone the gene. Success fell in 1994 to a company called Myriad Genetics who patented the gene for its own use. This patent constrained important research by others and, given the company's claimed exclusive right to market drugs based upon this discovery, would have led to a substantial charge being required of those wishing to avail themselves of its benefits. After nineteen years, in 2013, the United States Supreme Court ruled unanimously that genes were natural products that could not be patented. This enabled Mary-Claire to greatly broaden her applications of genomic sequencing to evaluate DNA from women who had developed breast cancer and from their relatives to identify inherited mutations in genes critical to the development of breast cancer. This important work facilitated and encouraged early screening in women for breast cancer and simple genetic tests now inform women if they have mutations in the BRCA1 and other genes which increase the risk of breast and ovarian cancer. Mary-Claire herself advocates that all women over thirty should be offered screening for these genes. The actress Angelina Jolie made headline news when, having learned that she had a BRCA1 mutation, decided to undergo a double mastectomy.

The discovery of the "breast cancer gene" revolutionised the study of numerous other common diseases. Since 1990 Mary-Claire has been working in collaboration with scientists round the world to identify genetic causes of hearing loss and deafness and in 1995, after she assumed the post of American Cancer Society Research Professor at the University of Washington, she and her colleagues successfully cloned the first gene responsible for non-syndromic deafness.

Now I wish to turn to Mary-Claire's humanitarian involvement. She first applied her genetic skills to human rights work in 1984 when she began working with the "Grandmothers of Plaza de Mayo" in Argentina. She used dental genetics to identify missing persons ultimately identifying 120 children (who are now of course adults) and helping their being reunited with their biological families. Most had been born to women in prison who had since been murdered as political dissidents and their children taken by military or police families.

She also participated in analysing the remains of the Romanov family, the last Czarist family whose members were shot on the night of 17 July 1918 and whose bodies were buried in a forest and exhumed in 1991 in Ekateringburg in Russia. She has also worked with numerous human rights organisations to identify, by means of DNA testing, missing persons in Argentina, Chile, Costa Rica, El Salvador, Guatemala, Haiti, Honduras, Mexico, Croatia, Serbia and the Philippines and has assisted the United Nations' war crimes tribunals on many occasions.

Mary-Claire has received wide acclamation for her important work and has been elected to the U.S. National Academy of Sciences, the American Academy of Arts and Sciences, and the American Philosophical Society. She was awarded the Lasker-Koshland Special Achievement Award in Medical Sciences in 2014 for her bold and imaginative contributions to medical science and human rights and in 2016 the United States National Medal of Science. She has also received numerous honorary doctorates.

Remarkably, and without her prior knowledge, her work inspired the film "Decoding Annie Parker" in which she is portrayed by actress Helen Hunt.

Mary-Claire was the first to demonstrate that there is a genetic predisposition for breast cancer and this proof has changed critical thinking about the genetics of common complex diseases. Of her achievements she has said:

"We are extraordinarily fortunate to be living in this era of exciting discoveries and rapid scientific advancements in human genetics. There has not been a more exciting time since Gregor Mendel counted smooth and wrinkled peas and Charles Darwin tended finches".

Mary-Claire has certainly added to the excitement.

Mr Pro-Chancellor, it is my honour and privilege to present to you Dr Mary-Claire King for the award of Doctor of Science honoris causa.