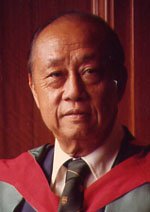 The extension of the work of the University in the field of the social sciences, in support of which a new Faculty was recently formed, encourages us this evening to offer our tribute in a new quadrant of learning, which matches those which we have made in Letters, Science and the Laws. It is extremely fitting that Kenneth Fung Ping-fan should receive the very first of these degrees now offered by the University. As one of the Colony's outstanding leaders in banking, commerce and industry he possesses in abundance those qualities of personal endeavour and initiative which our students could be advised to emulate.

While he was still a student in the School of Chinese Studies, which his father, a noted philanthropist and benefactor of this University so richly endowed, Kenneth Fung was given the responsibility of administering an intricate business organization, a task which would have daunted any man. From the beginning, he displayed an unfailing confidence in the future of the Colony and showed such powers of leadership that he inspired others to a new sense of purpose in their affairs. By his example he has built up our economic well-being, giving Hong Kong an international outlook and position, in support of which he has led trade missions and delegations abroad.

His particular contribution, again by the force of his personal example, has been his staunch support of the concept of service to the community, on which, as we are all aware, the welfare of this Colony depends. To this end, he has invested his time, the most valuable of his resources, in the most valuable of our commodities, the aspirations of our young. He has devoted himself to the improvement of our welfare organizations and to the establishment of schools. He has involved himself closely in the work of the Scout movement and of the YMCA. He is a past Commissioner of the St John Ambulance Brigade and was the first Chairman of the Duke of Edinburgh's Award Scheme in Hong Kong. At the same time, he has taken a full and active part in the cultural life of the Colony, offering his support to numerous societies concerned with music and the arts. In the field of higher education he has offered the benefit of his guidance to the two Universities; he has been a member of our Court since 1948. He was for a long period a member of the Urban Council and of the Legislative Council and he has been an Unofficial Member of the Executive Council since 1962. He has the distinction of having been the first Chinese Hon ADC to four successive Governors and Officers Administering the Government.

He has added lustre to the name of one of Hong Kong's most respected families, and by virtue of his personal achievement he has moved to the forefront of the Colony's affairs. In recognition of this I respectfully request you to confer on him the honorary degree of Doctor of Social Sciences.